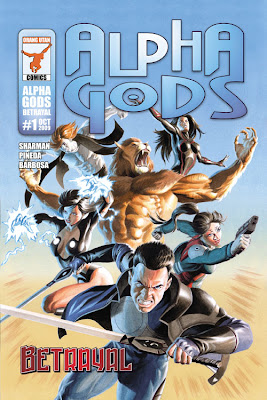 The Alpha Gods stage an assault on a secret laboratory to save a young girl from an evil organization's clandestine schemes. Who is Nyssa? And what is her connection to the Alpha God's leader, Paladin?

In the year 2086 humanity faces a new threat, Extra Humans. The government is struggling to cope with the growing number of mutants, aliens and supernatural beings who are living amongst us. People are beginning to panic and so, in 2050, the Department for Extra Human Affairs was established with a remit to try and contain the problem. By 2086 the situation has escalated, so they have formed a new rapid response strike force, the Alpha Gods. Who better to police the Extra Human community than Extra Humans themselves?

For the last couple of years, the superhero team up has been pretty much done to death.  Take the 'X-Men' and the 'Avengers' for example.  Since the movies hit big at the cinema, there have been so many different sets of teams that it's next to impossible to keep track of who is where and why, so I was a bit weary when I was giving this release to review and hoped that it wasn't just another team up story.

Yes this is a team up story so to speak but what we have here is a superb first issue for a title that, even after only one issue, I'm clambering to get to the next one.

The issue starts with a bang when the team has to attack and break in to a compound to rescue a young girl.  What we then have are some superbly drawn action sequences but it's not just all fight, fight, fight.

Instead thanks to the brilliant writing of  Ian Sharman, we have a team that does work together really well but there seems to be something bubbling under the surface.  There also seems to be some tension between some of the characters as well but it's done in such a way that you really want  to know more about it.  Sharman hasn't beat you over the head with it, instead he's given you just enough information to whet your appetite and hook you in.

It's the same with one of the characters going up against the Alpha Gods team itself.  I can't wait to see what her connection is to the team.  There are a lot of hints and a little snippet of a back story and I definitely want to see where it's going to be taken next.

The art for this debut issue is superb.  The best way I can think of to describe it is that it looks a little like the art in the 'Avengers Academy' series but with more bite and impact to it.  Pineda and Barbosa work superbly together and each others work definitely compliments the others.  I'm quite eager to see more of their work, hopefully in this title, and any others that they've done.

I'd be remiss if I didn't mention the cover by Azim Akberali.  I'd not seen any of Akberali's cover work before but I'll be checking out more of it after seeing this one.

All in all, a good character driven and exciting debut issue of 'Alpha Gods: Betrayal' from Ian Sharman and his team.  If the other issues are this good then we're going to be in for a treat.

For more information on Orang Utan Comics and their various releases click here
Posted by Pat Scattergood at 12:32