Zombie of the Month: Part 1 Review 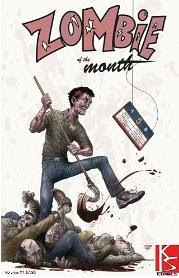 
In a world where zombies have adapted human-like attributes, follow Roy, an alcoholic zombie with a deep seeded hatred for authority. Join Roy and his morbidly obese vegan human friend Zach, in their quest to pay the rent.

This 48pg on-going underground zombie-comedy includes the original ZOTM strip, Roy's origin, and Roy fights for his after life Part 1 and more...

Zombies.  I've always had a bit of a soft spot for them in their various incarnations and forms.

Recently thanks to movies like 'Fido', 'Shaun of the Dead' and the such, the zombie comedy genre has absolutely exploded and this one fits in there brilliantly.

The writing here comes across as many different styles.  You have the 'best friends' style comedy of 'Shaun of the Dead', some slapstick comedy as well as moments of pure satirical goodness that had me in tears of laughter on more than one moment.

At the same time as being very funny, the story itself has some good characters in it.  They're written in such a way that they really do come across as best friends.  They mock each other, get in to scrapes with one another.  In fact, the fact that one is a zombie is pretty treated as not all that important.  It's a bit like it's the characters quirk.

The artwork is simple but effectively done here and really adds another layer to the story itself.but it's the covers that really stand out the most thanks to the work by Charles Paul Wilson III.

All in all, this is a really good release and a good addition to the zombie comedy genre in general.  Is it a world beating title?  No.  But it is a very funny and very enjoyable one that is well worth picking up.

Posted by Pat Scattergood at 17:24