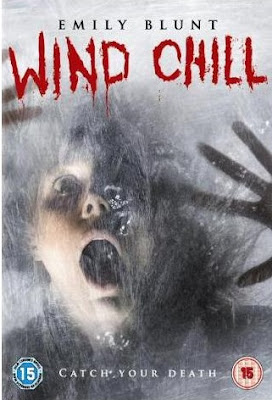 
It's Christmas break. A young woman catches a ride home from a stranger she meets through a college ride board. Racing to beat a severe winter storm, the two young travelers take a shortcut down a remote country road, only to find themselves forced into a snow bank by a mysterious vehicle that engages them in a dangerous game of chicken.

Over the long night that ensues, an intense relationship develops between the pair as they must brave the elements and confront the road's sinister legacy that dates back to the terrible events that occurred there in the 1950s.

In fact, it's best described as a good, maybe even old fashioned, style spook fest of a movie.

Slow and methodical, the movie really increases the tension and the underlying feeling of dread that runs through the entire movie. In fact, the performances really add to that as well. Told mostly inside a car, you would need two very good actors to be able to pull this movie off and that's exactly what we have here.

Emily Blunt and Ashton Holmes give, in my opinion, their best performances by far and really play off one another superbly. It's their relationship that really gives the movie it's heart but there's one other person that really ramps up the quality of the movie.
Martin Donovan, from 'The Sentinel', is quite frankly fantastic as the Highway Patrolman and really gives off a feeling of an evil menace even with next to no dialogue. I honestly couldn't take my eyes off of him whenever he was on the screen because you really didn't know what his character was going to do next and why. Yet the filmmakers here have managed to do that with no gore or needless jumps.

The special features here don't exactly set the world alight considering there is only a commentary and a making of featurette but they are very interesting and really give a great look in to how they made the movie.

I highly recommend this to anyone that wants to watch a high quality yet subtle horror movie because this one is severely under rated.
Movie 4/5
Picture 4/5
Sound 4/5
Special Features 3/5
Overall 15/20
Posted by Pat Scattergood at 10:15