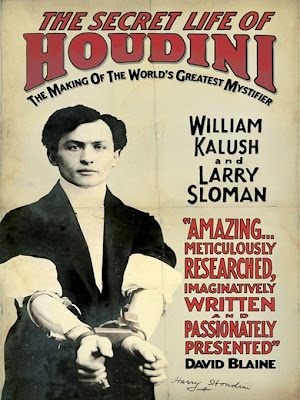 Using exclusive access to newly uncovered archives, Kalush and Sloman reveal the clandestine agreements in which the British and Americans recruited Houdini to be an active secret agent. In exchange for his cooperation, the governments of these two countries facilitated his rise to the top of the world stage.

The authors give thrilling accounts of his assignments, such as his participation in early aerial surveillance and his use of his own magic magazine to communicate espionage-related information.

After the war, Houdini embarked upon what became his most dangerous mission when he took on the Spiritualist movement. Convinced that Spiritualist mediums were frauds, he became obsessed with exposing them. But the Spiritualists were a powerful adversary. An organized network of fanatics, led by Sherlock Holmes creator Arthur Conan Doyle, worked relentlessly to orchestrate a campaign that would silence Houdini forever.

Grounded in solid research, but as exciting and dramatic as a good thriller, THE SECRET LIFE OF HOUDINI traces the magician's long and circuitous route from struggling vaudevillian to worldwide legend.

As a big time fan of Houdini, I've read a lot of books and seen a lot of documentaries about the man himself.  Some of them have been good and some, well, not so good but which category does this one land under?

Well, this one is definitely one of the good ones.  In fact, I would say it's one of the great ones.

Here the authors have crafted a superbly written and well researched biography of one of the world's greatest magicians but it doesn't end there.  Not only do they delve deeper in to his life than any other Houdini biography I've read before but they go in to massive detail about where the moments, both big and small, take place and even in to the historical moments during his lifetime.

The amount of people that Houdini met during his life reads like a veritable who's who of the showbiz world.  Each of those meetings is well documented, along with even the slightest details around those meetings.  No stone is left unturned would be a good way to describe their approach.

I have to admit that a couple of moments that they write about here do seem a little far fetched and that they rest on mere coincidences but for the most part, the research really does shine through.  There were many things that I didn't know about the man himself, which considering how many of these biographies I've read was a pleasant surprise.  I really liked the fact that the people that helped him get to where he ended up in life were well represented here.  Warts and all.  Instead of just making everyone seem perfect, everybodies flaws are clear and presant.  That made a nice change instead of making Houdini and everyone else seem like saints.

Another massive plus point of this book was the sheer amount of photographs and other bits and bobs that are included.  A lot of them I haven't seen before.  There were also some brilliant family photographs as well and that really helps deliver a well rounded look at a legendary figure.

If you are a Houdini fan then this biography is an absolutely essential purchase.  I just couldn't put it down.  Essential.

Posted by Pat Scattergood at 12:08