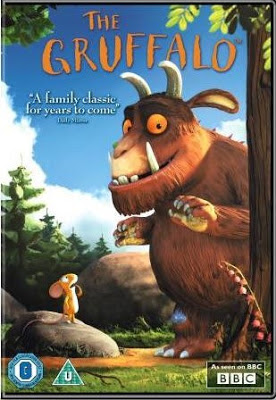 A cunning mouse goes for a walk in the forest and outwits a succession of predators.

'The Gruffalo' by Julia Donaldson and Axel Scheffler has been a favourite in my household for a long time.  In fact, it's one of my little lad's favourite books to read.

When I heard that they were going to adapt it for television, I wasn't sure if  they would manage to capture the warmth and charm of the book.

I shouldn't have been worried at all because here, they have delivered a beautifully animated and heart felt story that rivals even that of the superb children's book.

The fact that Donaldson helped to adapt it is probably one of the main reasons it works so well but that's not to underestimate the rest of the work of the crew and cast.  In fact, it's the cast that really brings the gorgeous animation to life.

James Corden does a superb job as the voice of the mouse but it's Robbie Coltrane as The Gruffalo that blows me away.  His voice is just absolutely perfect for the part and he really plays it up as if he is having the time of his life being the Gruffalo.  The addition of the legendary actor John Hurt as the Owl was a great bit of casting.  His voice just gave the Owl a world weary and bitter quality to the character.

The cartoon is full of great little touches that nod to the book.  My favourite of these being the illustrations of the Gruffalo being used when the mouse is describing the various 'scary' parts of the creature to the other animals that want to eat him.

Special features wise, there isn't a whole lot here quantity wise but the making of featurette was really interesting and really packed in some great information about how they adapted the story for the screen and how they animated it.

All in all, this is a superb adaptation of a brilliant children's book and, in my opinion, is definitely going to become a children's classic in years to come.

Posted by Pat Scattergood at 01:03