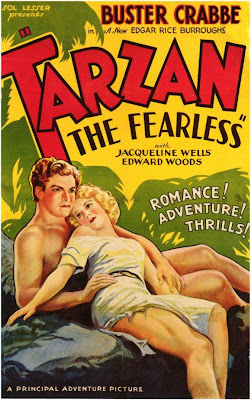 In the African Jungle, a group of Europeans come across the fabled white man who was raised by apes. Tarzan takes an immediate liking to the blond Mary Brooks and rescues her during a nasty storm.

Not everyone in the party sees Tarzan as a friend and one of the safari guides, Jeff Herbert, has a written offer of £10,000 for anyone who can confirm that the ape man is dead.

Mary's father disappears however, taken prisoner by those who guard the treasure of Zar.

It's left to Tarzan to rescue him and the others who have been taken prisoner.

I've always had a bit of a soft spot for the old black and white serials from the 1930's onwards and even now I'm past 30 years old, that doesn't seem to be changing anytime soon.

This feature length movie is basically cobbled together using the first four chapters of a Tarzan serial.

To be honest, that makes the story quite disjointed in places and hard to follow in others yet it is still a hell of a lot of fun to watch.  Coupled together with Buster Crabbe's portrayal of Tarzan, that makes for a good, but not great, addition to classic movie fans collections.

Buster Crabbe, also famous for his role as Flash in the 'Flash Gordon' serials, is definitely one of the best versions of Tarzan to ever grace the screen.  His agility and poise  all while looking like someone that could legit wrestle animals.  While it's true he doesn't have the trademark Tarzan yell, his physical performance more than makes up for it.

The rest of the cast, while not memorable, aren't terrible either.  Mischa Auer however seems to be trying to channel Boris Karloff with his performance for some reason.

All in all, while the transfer isn't great, that's down to the sheer age of the movie itself so I've tried to be quite fair with the mark.  It's the same with the special features.  There never are any special features with the serial releases so I've not included it in the final score,

Even with no special features and a good but not great transfer, this is still well worth picking up.  Considering you can get this one for next to nothing and it has a great performance by Buster Crabbe as Tarzan, it's most definitely worth adding to your collection.

Posted by Pat Scattergood at 11:29