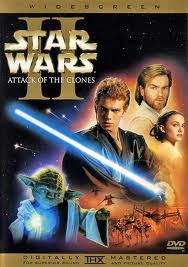 
Duty and Forbidden Love Clash In The Second Chapter of the Star Wars Saga.

Anakin Skywalker has grown in to an accomplished Jedi apprentice under the teachings of Obi-Wan.  Now he has to choose between his duty as a Jedi  and the forbidden love he feel.  See the climactic Clone Wars battle and see Yoda in a lightsaber duel in a battle to save the universe from darkness.

Review
After the abomination of 'Episode One' George Lucas followed that up with 'Attack of the Clones' but was it an improvement on the first movie?
The answer to that is, well, sort of. While a lot more exciting than 'Episode One' and with more of a classic saga feel to it, it still suffers from the near enough the same problems.
For the most part, the cast just seem intent on going through the motions.  Not even McGregor seems all that bothered about giving a good performance and that is a big let down for me.  Portman improves on her awful performance in the first movie, although not by much.  At least she puts a bit more emotion in this one.
Also I'm not looking for Oscar winning performances here but some of the acting here was even worse than the first movie. The main one at fault here was Hayden Christensen as Anakin. He seemed to use the same facial expression for every emotion.  A bit like Kurt Angle does in 'River of Darkness' but at least Angle had the excuse that he is a wrestler and not an actor to fall back on.  What the hell was Christensen's excuse?

Also there was one part of the movie that I was really looking forward to that turned out to be the biggest disappointment.  When I found out that Yoda was going to be kicking some ass in this movie, I was excited.  I mean how can you not be excited by that?  He's a legendary Jedi right?  Well, I've seen better looking fight scenes in 'Bulletproof Monk' and those were awful so that should tell you something.
There are still the flashes of brilliance here and there that Lucas managed with the original trilogy but once again those are few and far between.
The special features are incredible on this release and so massively detailed that you can't help but be drawn in to their world and get a sense of wonder.  Once again it's such a shame that brilliant special features like these are wasted on a movie like this.