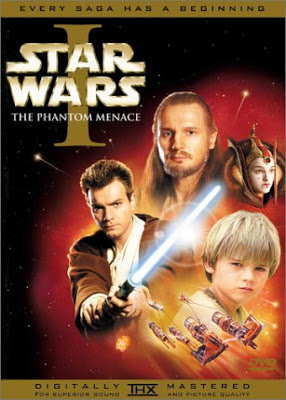 Written and Directed By George Lucas

The opening chapter in the fabled Star Wars saga: two Jedi knights, Qui-Gon Jinn and his apprentice Obi-Wan Kenobi, must rescue the young Queen Amidala and help her save her home planet, Naboo, which is under blockade by the ruthless trade federation.

When the federation attacks, the Jedi spirit the queen away to relative safety on the desert planet of Tattooine. It is there that Qui-Gon discovers a boy, enslaved by evil gambler Watto, who has the potential to become the most powerful of the Jedi. His name: Anakin Skywalker...

Review
Where do I start with this? When the prequel trilogy was announced, I was immensely excited about all the possibilities that could come from the mind of George Lucas.

Then this turned up. To me, this movie isn't a Star Wars movie. It's more like a Disney movie in space.  The best way to discribe this dross of a movie would be that someone gave my 3 year old son some money and a computer and told him to make a story.  It really is that bad!

The cast is poor beyond belief and one of the worst culprits of this is Natalie Portman, which is very disappointing as she is one of my favourite actresses.  She's meant to be exuding an aura of calm and serene royalty but she comes across as just being bored.  It's the same with Jake Lloyd as Anakin but it's more forgiveable with him as he's only a kid, albeit a really annoying one.

Don't even get me started on Jar Jar Binks.  What the hell was Lucas thinking when he created that piece of crap character.  For the first time in my life, I was actually rooting for the bad guys to capture this guy and kill him off!

Ray Lloyd as the silent but deadly Darth Maul was definitely one of the few highlights in this movie.  Maybe if they had put him in there a bit more and made him seem like more of a threat then maybe I would have enjoyed this movie a hell of a lot more.
It's not all bad however. There are some flashes of immense quality. The fight scenes with Darth Maul, the space battles and the pod race are well done but those flashes of brilliance are so buried under the rubbish in the rest of the movie that they are so hard to find that it's very close to not being worth the effort.

But all that hard work is let down by some severely wooden acting, poor dialogue and some moments of sheer mediocrity.

The extras are amazing and this double DVD set is quite literally over flowing with extras, all of which really excite the Star Wars fan in all of us.  It's a shame that the movie didn't live up to the promise shown by the special features.

If I'm honest, it's nearly worth getting this title just for the special features alone, it's just a shame that the release is let down by such an awful movie.
Movie 1/5
Picture 4/5
Sound 4/5
Special Features 4.5/5
Overall 13.5/20
Posted by Pat Scattergood at 12:49