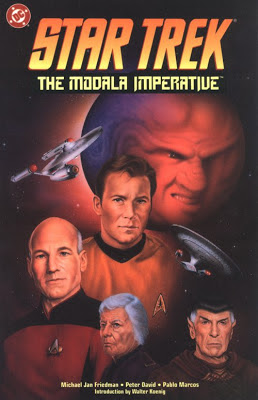 For the first time, characters from "Star Trek" and "Star Trek: the Next Generation" meet.

Action centres on Modala, a troubled young world rescued by Kirk and the "Enterprise".

A century later, the ship returns and Picard finds he must rely on veterans Spock and McCoy to help save Modala again.

As a fan of both the original series of 'Star Trek' and of 'The Next Generation', I was excited to find this release combining the both.

Apparently this was the first ever cross over between the two series and on that aspect, it's a good first cross over.

Bringing together two 4 part series, one of the original  series and the other featuring the 'Next Generation' characters, this collection really works well.

The first four issues featuring the original series characters is the best of the two by a large margin.  The writer, Michael Jan Friedman, really captures the feel of the show and in particular the characters, even down to the different ways that  they speak.  The characters are so memorable from the show itself that you honestly hear the dialogue in their voices.

In fact, the fast pace of the story itself really creates a sense that this could have been an episode of the television show.  To be honest, I would have liked to have seen it as one.  The interplay between Kirk and Chekov is really well thought out but it's the relationship between Spock and McCoy that really forms the back bone of the story.  They really jump off the page throughout the story.

The second four issues involve the characters from the 'Next Generation' series, while not as good as the first four issues, still works well as the finale of the story itself.  McCoy and Spock reappear for this story and once again, steal the show.

While Peter David crafts a good story and with some good twists and turns, it still doesn't gel as much as the 'Original Series' part of the story.  There are however, some really good comedic moments in places, many of which involve the resident android Data.  Also there was a scene involving Data and Spock that really made the inner 'fan boy' in me smile.

The art for both stories is by Pablo Marcos is really well drawn for the most part but for some reason, some of the panels in the second part of the story just didn't seem to work as well as the others.  It's kind of weird that the art seems better in the first half considering it's the same artist but that said, I have seen a hell of a lot worse.

All in all, this is a good title for fans of either series to pick up.  The story is well paced, exciting and really captures the feel of both series to a really good extent.  The art, while not great in the second half of the graphic novel, is still good enough to make the action and characters feel like their real life counterparts.