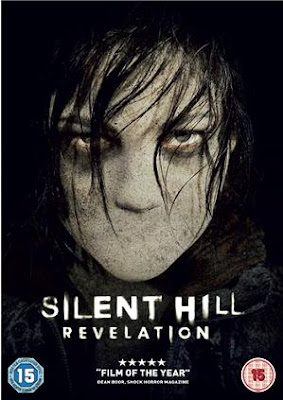 Heather Mason and her father have been on the run, always one step ahead of dangerous forces that she doesn't fully understand, Now on the eve of her 18th birthday, plagued by horrific nightmares and the disappearance of her father, Heather discovers she's not who she thinks she is. The revelation leads her deeper into a demonic world that threatens to trap her forever.

I have to admit that I absolutely loved the first 'Silent Hill' movie because of the fact that it was an intelligent and actually incredibly spooky horror movie that really knew how to make the viewer jump without resorting to the cheap scares so popular in recent horror movies.

This one however, not so much.

Ok, it's not as awful as you may have heard but neither is it a good horror movie either.  It's a muddled and convoluted mess and not even a bat shit crazy Malcolm McDowell could save it.

However, there are some good moments.  I can't comment on the 3D element as I watched the 2D version but the parts that would have been 3D stood out massively and must have looked brilliant on a big screen.  The opening part of the movie was by far the best.  It had the spooky and jumpy feel of the first movie and was very well shot.  It's just a shame the  rest of the movie didn't even come close to matching the opening.  It was almost as if they'd used their creativity up on those first few minutes and then just throw everything together at the last minute.

The make up effects did look amazing though, as did some of the characters transformations.  They really did look like something  that would come from hell and really looked formidable.

Cast wise, this movie is a big let down.  Even Sean Bean, one of my favourite actors of all time, just seemed to be going through the motions and seemed to be channeling the Dick Van Dyke school of accents through out the movie.  I have to admit however that Malcolm McDowell was an absolute blast as Leonard and really sounded like he had a lot of fun playing someone so incredibly evil.  In fact, I would have definitely loved to have seen more of his character.

The latest media darling in the shape of Kit Harington, from 'Game of Thrones' I believe, plays Vincent.  Vincent is apparently a high school kid even though he is quite clearly in his late 20's but I should be used to that considering how many 'slasher' movies I have watched.  Harington took what was a main role that should have been memorable and turned him in to a cookie cutter character that I personally, didn't really care at all about.

However, it's the writing and the directing style that is the movies biggest weakness.  Gone is the Gothic grandeur of the original and gone are the subtle but spooky scares.  Instead we have a bog standard, let's make everything loud so it scares people more kind of horror movie.  The director resorts to some really cliched jump cuts to try to make the viewers jump or scream but for me, they just seemed so over blown that it had a case of 'been there, seen that' to it.

I was really disappointed with this movie, especially after watching the first one.  Maybe I expected too much but what I got was a cliched, muddled mess of a horror movie with some really bad acting.  With the scene after the credits, it's definitely open for a third movie so hopefully they'll get back on track with that installment.