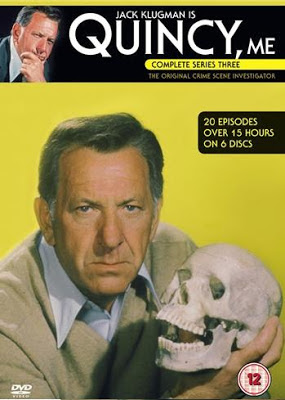 Created By Glen A. Larson and Lou Shaw

Classic award-winning crime scene investigation drama with more than a hint of nostalgia.

Originally broadcast from 1976 to 1983 Quincy ME stars Jack Klugman in the title role as the strongwilled, very principled Medical Examiner for the Los Angeles Country Coronor's Office.

When dead bodies arrive, Quincy must determine the cause of death but if he suspects foul play he must tread the line between pathologist and detective until he knows the full story.

This six disc set contains all 20 episodes from the third series of the original crime scene investigation drama.

'Quincy, M.E.' has always been a favourite of mine after growing up watching the reruns of the show with my parents.

This series release really brings those episodes back with a great transfer and some exciting storylines.

While the episodes aren't exactly the sort that can be described as 'balls to the wall' action, the cast make each case seem just as exciting and important as the last.  In fact, it's the cast that make this series so endearing and long lasting.

Jack Klugman gives yet another great performance as Quincy, the expert medical examiner that together with Sam Fujiyama, played by Robert Ito, work to get to the bottom of various murders and other cases.  The rest of the cast really come across as if they have all worked together for years.  That really gives the series yet another layer of charm to it.

The stories here are nearly all fast paced, well written and exciting.  One of the main strengths of the series has always been that the writers weren't afraid to tackle heavy duty subjects.   There are stories  here that concern rape, child abduction and others but all are handled with a deft hand and without having to resort to shock tactics.  The only episode that I didn't think lived up to the other episodes was the one named 'A Question of Time' and that's only because it just didn't seem to gel as much as the others.

It's a shame that there weren't any special features other than a photo gallery.  I would have liked to have seen some behind the scenes stuff or even some interviews but that's a minor complaint.

This is definitely a series that is well worth picking up.  Good stories, hard hitting subjects written in an intelligent way and a great cast all add up to being a long running and beloved television series.

Posted by Pat Scattergood at 16:13