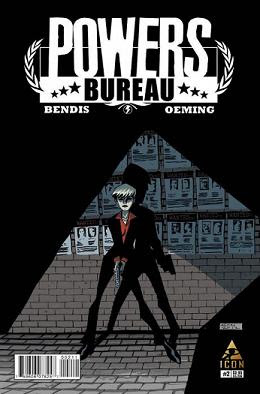 After the shocking events of issue 1, the team of Deena and Walker have reunited and are on the trail of 'Powers' related pregnancies and the dealer who is giving them the means to do so.

Someone is on their tail but who?

After the absolutely brilliant return of 'Powers', I was massively eager to get my hands on the 2nd issue so that I can see what happened to Walker.

At the end of the first issue, we are  reunited with Walker and I was expecting some answers as to where he has been, what he has done etc but we don't get that here.  Instead we're thrown straight in to the story with the duo now working at the FBI.

On one hand that kind of disappointed me but on the other hand, I'm used to Bendis's writing in that just because it's not in this issue, it doesn't mean that it won't come up in a future issue.

The rest of the writing is up to Bendis's normal, incredibly high standards. In a monthly comic, long pages of just dialogue shouldn't normally work but with the skill shown by Bendis, it works brilliantly.  The interplay between Deena and Walker is fantastic as always and the interrogation scenes are equally funny and exciting.

Story wise, it moves along at a cracking pace and really answers some of the questions left by issue 1 but then replaces them with just as many, if not more, questions when this issue ends.

The only complaint I have about the issue is that the ending left me a bit confused as to who exactly did what.  The scene looked like the FBI had done 'the deed' (I don't want to give away the ending) but the writing makes out that a set of 'Powers' did it.  Hopefully that will become clear in the 3rd issue.

As always the art by Oeming is absolutely spot on.  I don't think I've been able to fault his 'Powers' work because he just seems to 'get' the characters and the stories, which leads to him seemingly knowing exactly what to bring to the forefront of the page and when to do it.  He really is a criminally under rated talent in the comic book world.

All in all, it's not as good but as the first issue but on the other  hand, the story is still setting up all it's pieces so it's a bit unfair to judge where a story is going on only it's 2nd issue.  Still well worth picking up for the great art by Oeming and the brilliant (as always) word play by Bendis.