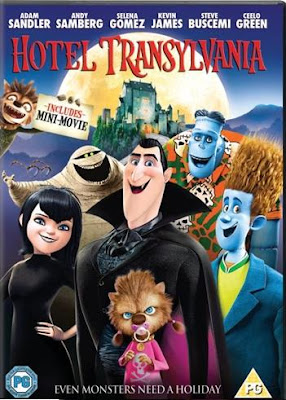 Welcome to Hotel Transylvania, Dracula's lavish five-stake resort, where monsters and their families can live it up and no humans are allowed. One special weekend, Dracula (Adam Sandler) has invited all his best friends - Frankenstein and his wife, the Mummy, the Invisible Man, the Werewolf family, and more - to celebrate his beloved daughter Mavis's (Selena Gomez) 118th birthday. For Dracula catering to all of these legendary monsters is no problem but the party really starts when one ordinary guy stumbles into the hotel and changes everything!

I have to admit, I'm not all that much of a fan of Adam Sandler movies so when I heard that he was going to be playing one of the main characters in this animated movie, I had my doubts about whether or not it was going to be any good.

I need not have worried at all.  This is the sort of movie that is absolutely perfect for a family.

There is a ton of slapstick style comedy and exciting moments for the kids and there are tons of  jokes for the mum's and dad's out there as well.  And a miracle even happened.  Adam Sandler was really good in this movie.  In fact, he was one of the best ones here, giving a superb portrayal as an overprotective father who just happens to be a vampire.

The cast is eclectic to say the least.  You have comedians such as David Spade and Kevin James but then you have people such as CeeLo Green.  The cast really do a great job with the sharp, witty dialogue and really give this story a tender heart at the middle of it.

However the best of the cast is by far Selena Gomez as Mavis and Andy Samberg as Jonathan.  The chemistry between the two characters really give the impression that this young couple really is a young couple who have started to fall in love with one another.  The portrayal by these two really does shine through and considering how good a cast there is, that's brilliant.

Animation wise, this movie looks absolutely brilliant.  The bright colours and frenetic movement of the characters work really well on the screen without it looking too busy or cluttered.  This approach really works well on both the exciting scenes and the dialogue driven scenes as the facial detail enables the characters to not only use the great voice performances by the cast but facial expressions as well.

The special features here are great and even include a short movie to go along with this movie as well.  There is some nice behind the scenes stuff for us nerdy adults out there as well as some fun things there for the little ones too.

As an adult I absolutely loved this movie.  The story between the two youngsters was beautifully done and was really adorable and the jokes that came think and fast.  My favourite of these was the joke about Mavis being 118 although her trying to pronounce Hawaii was also a close second.

My son absolutely howled with laughter nearly the whole way through and the movie itself held his attention for the entire run time and you can't  ask for more than that. 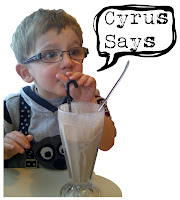 "This film funny.  I no like the scary naughty men with fire.  They  naughty.  The daddy funny."