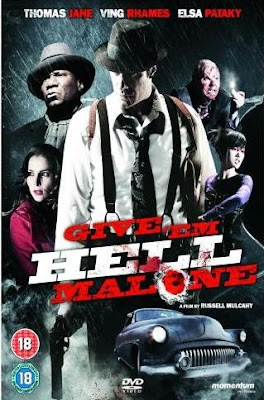 Give 'Em Hell Malone tells the tale of a tough Private Detective named Malone (Thomas Jane). Malone is tasked with getting a mysterious briefcase. Along the way he runs into various gangsters and people of the criminal element who also want the briefcase. Bad news for them, since Malone is renowned for his brutal brand of justice!

There is one thing that I would like to know about this movie.

Is it meant to be so funny or is it actually meant to be a straight up 'The Spirit' meets 'Sin City' via a bit of 'Dick Tracy' movie?

I have to admit that some of the scenes in this movie had me in absolute hysterics because of the sheer absurdity of it all.

It really does come across as a poor mans 'Dick Tracy' meets some of the worst moments of 'The Spirit'. The dialogue is absolutely atrocious in places and really had me laughing like crazy. If the dialogue was meant to be funny then fair play to the writer, he knocked it out of the park. If, however, it was meant to an homage to movies like those that I have mentioned already then I have no idea what he was thinking.

The direction from Mulcahy is his normal style in that he is great at the action scenes but poor on the others.

Also one thing really bugged me throughout the entire movie. The editing was just atrocious through the whole thing. Some scenes seem to go too long and others seem to end really abruptly.

The performances however are what has raised the rating to a three instead of a two. You have Ving Rhames, who is his normal bad ass self and plays the part of the heavy really well. Then you have Thomas Jane, who seems to channel his performance from 'The Punisher' while seemingly relishing the dialogue that he is given. That said though, while he isn't in the movie that much, French Stewart is absolutely hilarious as Franky The Crooner. His performance had tears of laughter running down my cheeks.

However there were two performances that were borderline awful. Elsa Pataky was wooden in the role of the 'siren' and seemed to look bored through the entire movie but that's not the worse of the bunch. Doug Hutchison as Matchstick really tries to do his best Heath Ledger / The Joker impression but without any of the skill that Ledger brought to that role.

While the special features only add to a trailer, I don't think that this could have help the release that much.

While yes this is a bad movie, I actually found myself really enjoying it in a perverse 'this is so bad I want to see if it gets worse' kind of way. In fact I'd definitely class it as a 'so bad it is good' kind of movie. Yes, it has all the faults that I mentioned but sometimes, you just want to sit back and watch something with a bit of cheese and a hokey nature to it and this movie has that in spades.  Just don't go expecting a good movie.

Posted by Pat Scattergood at 10:04