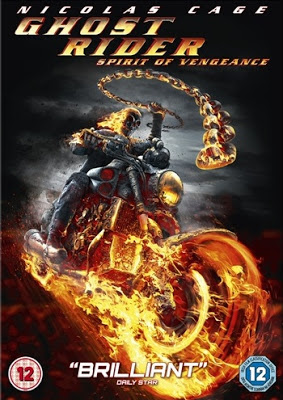 
Struggling to live with his flame-headed alter ego the Ghost Rider, Blaze is offered the chance to rid himself of his curse forever - but to do so he must defeat The Devil in a terrifying battle for survival.

Co-starring Idris Elba (Thor) and featuring ground-breaking special effects, Ghost Rider: Spirit of Vengeance is one hell of a ride.

The first 'Ghost Rider' movie was a bit of a disappointment yet managed to be a bit of a guilty pleasure of mine.

It's completely different here. While this still isn't a complete Ghost Rider movie, they do seem to have learned from a couple of mistakes they made with the first movie.

For the start they have improved how Ghost Rider looks massively. Gone are the clean lines and quick transformations. In their place are brutal looking transformations, acted out brilliantly by Nicholas Cage, and the Ghost Rider himself has a dark and grimy feel to him. In fact, for want of a better way of explaining it, he quite literally looks like he's gone from Hell and back.

Also Nick Cage gave a relatively safe performance in the original movie but that's nowhere near the case here. He gives an absolutely insane performance much like the one he gave in the 'Drive Angry' movie. One of those moments that I really liked came near the beginning of the movie in fact. In the middle of causing a hell of a lot of destruction Ghost Rider just stops and starts swaying then without running runs and screams in a villains face. It's little insane moments like that that made the movie fun.

I really liked the villain in this one too. Ciaran Hinds takes over from Peter Fonda as the Devil of the movie and in all honesty, I actually enjoyed his bitter yet kooky take on the character. I also liked the addition of Blackout, a character familiar to Ghost Rider fans. While this portrayal wasn't anything like the character in the comics, he did come across as a great counter foil to Ghost Rider himself.

Obviously there were a few bad moments in this movie. The misplaced attempts at humor near the beginning being the main one. Those couple of 'humor' attempts took me out of the movie for a couple of minutes but the fast pacing and action packed battles really made up for that.

There were also a couple of story line changes from the first movie such as changing how he signed the contract but those are minor little moments so it didn't bother me that much.

The only other annoying thing was Idris Elba's attempt at a French attempt. It just seemed out of place in all honesty.

A rather nice surprise for me was the addition of Christopher Lambert to the cast as a bald monk named Methodius.

The special features themselves are really interesting and I especially liked seeing how they made the special effects during the transformation of Ghost Rider himself.

To be honest, if you disliked 'Crank' or 'Drive Angry' then chances are you will most probably hate this movie but I for one thought it was insane but one hell of a ride.
Movie 3.5/5
Picture 4/5
Sound 4.5/5
Special Features 4/5
Overall 16/20
Posted by Pat Scattergood at 14:06