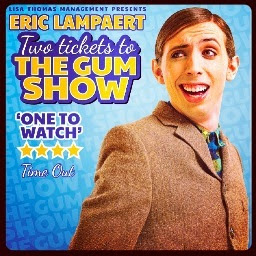 Hi, I’m Eric Lampaert (T4 Rising Star 2012, Life’s Too Short, Cardinal Burns, The Midnight Beast). I don’t really think I have a weird face, but the countless heckles, reviews and Internet abuse I’ve received suggests otherwise. Clearly that’s all people want me to talk about. So here’s a “One To Watch” (Time Out) freak show to get this topic out of the way. My face even made me famous in Mexico without me knowing...

I've known of Eric Lampaert from the 'Viva' television adverts and from his various appearances on television, including a very funny appearance in the 'Life's Too Short' sitcom starring Warwick Davis.

When it was announced that he would be doing a show at Dave's Leicester Comedy Festival this year I couldn't wait to get my hands on to a ticket.

Coming out to a song about gums, you know exactly what to expect.  Eric Lampaert presented to us a show revolving around all of the abuse and jokes that he has had to endure over the years.  Or at least that was the plan.

What followed was wonderfully shambolic.  One moment sticking to the show outline and other moments talking about'Lord of the Rings', gay hobbits, masterbation and Milton Keynes.  Most of these had the crowd absolutely howling with laughter.

The jokes gelled wonderfully with the sheer about of energy that Lampaert puts in to his performances.  At one point he even starting inviting hecklers and telling stories about the various things that he has had shouted at him by other crowds.

All in all, the show may have been a bit shambolic in places, it really worked.  The way he would go off on random subjects before going back to the original, planned performance gave the show much more energy and humor than if he had been just reading from a script.

Eric Lampaert is an absolutely superb comedian and I highly urge anyone to check him out.  You won't be disappointed.