Behind The Mask by Rey Mysterio Review 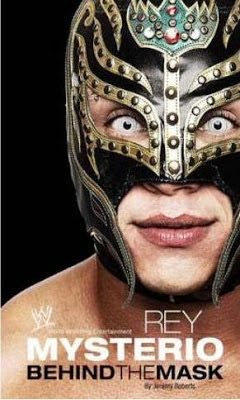 Exploding onto the wrestling scene in the mid-1990s, the colourfully masked Rey Mysterio quickly redefined the way the game was played in the ring. Making an immediate impact with his fast-paced style, Mysterio is on the cutting edge of wrestling excellence, and has four WWE Tag Team Championships, eight Cruiserweight Championships, and a World Heavyweight Championship to prove it.

His small size in comparison to other wrestlers (he is 5ft 6ins and weighs 175lb) only makes his achievements all the more extraordinary. Now, Rey goes behind the mask to talk about his sensational wins, his ability to defy the odds, and his resilience to battle back from the worst of times. The full story of one of wrestling's best-loved personalities is told here in a book no fan will want to be without.

Rey Mysterio is one of the best known and influential of all the recent lucha libre style wrestlers of my generation. When it was announced he'd be co-writing his autobiography, excited was an understatement.

I was bought this book as a birthday gift on it's day of release and I sat and read it all in one sitting before opening the rest of my gifts. You would think that would be a compliment and in a way it is, but while there were parts that I really liked (such as his early years wrestling in Mexico while earning next to no money), most of the book was incredibly tedious.

The book is also very schizophrenic in it's approach. One chapter makes Mysterio come across as very humble and thankful for his career. However the very next chapter comes across as so conceited and arrogant that they end up making me, as the reader, want to skip the whole chapter instead of reading.

Another thing I didn't like is that while it's informative in places, there are large places where details are incredibly glossed over.

This has over all been one of the most disappointing wrestling books I've ever read, which considering I am a large fan of Mysterio, is quite a sad fact.

Avoid and read one of Chris Jericho's autobiographies instead.

Posted by Pat Scattergood at 10:21