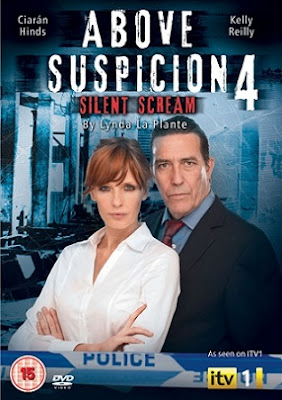 Kelly Reilly, Ciarán Hinds and company are back for the fourth and final series based on Lynda La Plante's hugely successful crime novels, Above Suspicion.

Silent Scream finds DCS James Langton (Hinds) enraged at having lost a bid for promotion, certain that someone has sold him out. That doesn't make for the most supportive teamwork as DI Anna Travis (Reilly) and crew investigate the brutal murder of an acclaimed young film actress.

The victim, Amanda Delaney, had secrets, lots of them. And enemies, lots of them too. But what she also appeared to have, among the married men and their angry wives, jealous actors and hard-edged directors, was someone who wanted something more, something more than she could give.

An already tense team find themselves at the mercy of suspects many of whose very profession is one of deception. When you add envy, wild passion and desperate addiction into the mix, you find a case that is stirring up too much interest and too great a risk to all involved. The way things stand, there will be more than one victim before the final curtain falls on Silent Scream.

Police shows recently have become less gritty and a lot more glitzy thanks to shows such as the various 'CSI' shows that are doing the rounds.  If that's what you are expecting here then you will be completely out of luck.

What we have here is a dark, grimy and very gritty British cop drama that takes a hard look at the seedy underbelly of an actresses life and death.

The cast, especially Ciaran Hinds as DCS James Langton, give absolutely brilliant performances all across the board.  However, this is most definitely Hinds show.  Each scene that he is in, you just can't take your eyes off him.  While his character is 20 years older than his partner, played by Kelly Reilly, show some great chemistry and really work well together.  It's a shame that this story is the last of the 'Above Suspicion' stories because I would have really liked to have seen more of them.

The death and the ensuing mystery around what exactly happened, is very well written but what else would you expect from Lynda La Plante, the queen of crime thrillers?  The end reveal for some reason just doesn't have the same impact as the rest of the story but I honestly think that's just because the rest is at such a high standard that there was no way it could have kept up.

The direction is absolutely superb and some of the best I have seen in a British thriller in a long time.  The use of the settings and of quick cuts, really ramp up the tension in the story.  Even in the quiet 'talking' scenes, there's a sense of tension and of forboding running just under the surface.

Special features wise, this release does have some good things there for the fans, especially the interview with Lynda La Plante, but for some reason it left me wanting more.

All in all, this is a superb addition to the British crime  thriller genre and well worth picking up, especially if you are a La Plante fan.

Posted by Pat Scattergood at 03:15