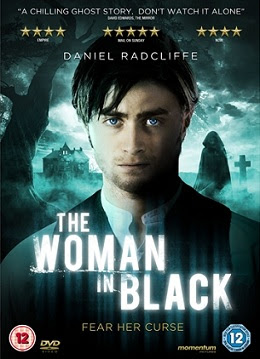 Based on the classic ghost story, The Woman In Black tells the tale of Arthur Kipps (Daniel Radcliffe), a lawyer who is forced to leave his young son and travel to a remote village to attend to the affairs of the recently deceased owner of Eel Marsh House.

Working alone in the old mansion, Kipps begins to uncover the town's tragic and tortured secrets and his fears escalate when he discovers that local children have been disappearing under mysterious circumstances. When those closest to him become threatened by the vengeful woman in black, Kipps must find a way to break the cycle of terror.

I have to admit that I put off watching this just because I was so used to seeing Daniel Radcliffe as Harry Potter that I couldn't imagine him as anybody else.

I was most definitely wrong.  Here Radcliffe plays a man who sadly lost his wife during childbirth and is deep in to the darkness of his grief.  Radcliffe plays that brilliantly.  He really makes the character seem like he is just a shell of a man, a man just struggling to carry on with his life.  The scenes with his son are incredibly touching and really brought a tear to my eyes.  In a bit of trivia for you movie buffs out there, Radcliffe's God child plays his son in this movie, which was his idea so that the relationship between the two of them appeared more realistic.

The rest of the cast do a truly fantastic job with an intelligent and incredibly spooky script.  Made by the Hammer studio, the movie manages to seem like one of the classic Hammer Horror movies that we all know and love yet still seem like a modern movie at the same time.  That's thanks to the wonderful performances, that I mentioned earlier and the great writing.

I can't tell you if it's close to the 1989 movie or even if it's faithful to the novel on which it is based as I haven't seen that movie or sadly, read that book.  I have to admit though, after seeing this movie I want to do both.

Talking of the 1989 movie, in another bit of trivia for you fans out there Adrian Rawlings, who played Daniel Radcliffe's father in the Harry Potter movies, played the part of Arthur Kipps in the original movie, which is the part that Radcliffe plays here.

Anyway back to this movie.  The sheer Gothic grandeur and atmosphere is fantastically done in this movie.  The houses, the shadows, the surroundings all seem to be a living part of the movie and the director does a truly stunning job of really creating a feeling of dread prevail through the entire movie without having to resort to cheap scares.

That's not to say that there aren't any scares here because there are many.  It's just that for once, a director has gone the intelligent route and left some of them to the imagination of the viewer and for me, that makes the scares linger longer and feel more affective.

The special features here are fantastic.  It's a cliche but there really is a little something for everyone here.  My personal favourite is the Ghost competition winner being read by Daniel Radcliffe.  The interviews and commentary are very well done as well, managing to give a lot of behind the scenes information as well as talking about things we may have missed in the movie but without sounding pretentious.

All in all, this is a brilliantly made and very affective horror movie with a psychological edge to it with a truly fantastic and heartfelt performance by Daniel Radcliffe.  It also has an ending that I didn't see coming and that for me was a pleasant surprise.  Well worth picking up.

Posted by Pat Scattergood at 09:05