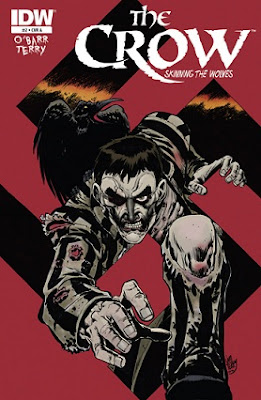 The long night gives way to fire and blood as the Crow sets his chess board for a final game against The Commandant….

When I reviewed issue one of this three issue run, I have to admit that I conflicted as to whether or not I liked it.  On one hand you had a well written air of mystery to proceedings, a good setting and some good artwork but on the other hand you had a story that even when it ended, you really weren't all that sure what was happening or what had just happened.

Here, that's completely reversed.  We end a glimpse in the the resurrected mans past and see a little bit of who he was and what happened to him.  We also get to see why he is going after the Commandant too.  We also get a bit of background and character development on the Commandant himself as well so that was really well done.

This part of the story really moves along at an absolutely cracking pace and really sucks you in.  Part of that is due to the absolutely fantastic yet brutal artwork by Jim Terry.  Not a splash of colour is wasted, in fact he uses it to such a degree that it really draws your eyes to the details of the characters.  The concentration camp victims are drawn in a very hard hitting manner that both stays in the memory long after the comic book has ended and really makes you think about what they must have gone through in places like that.

All in all, this is a massive improvement on issue one and in fact, I really liked it and the story itself hooked me in from start to finish.  Now I can't wait to read the third and final issue to see just what is going to happen next.

Posted by Pat Scattergood at 02:57