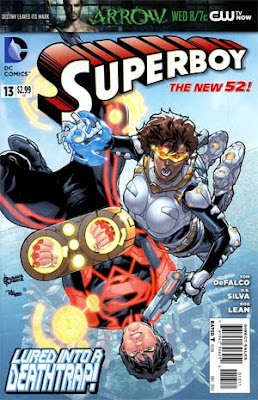 Superboy’s attempts to lead a normal life are interrupted by the reappearance of the mysterious Jocelyn Lure!

Superboy has never been one of my favourites because I've always found him rather bland and not all that exciting.  Has this issue changed my mind?

While this issue doesn't crash and burn neither does it fly high either.  That's not to say that it's a bad issue because it's not, it's just not all that memorable either.

One of the main problems with the Superboy comics is that he seems to run off with another team or someone else every other issue and in all honesty, that's getting really old really quickly.

Another thing that bugged me is that Superboy really needs to have some sort of name or something because getting called Cutie every other sentence is incredibly annoying and really starts to grate near the end of the issue.

The story itself is interesting and seems to helping Superboy gain some much needed momentum yet at the same time I just couldn't get excited about it.  I really am trying to like the Superboy issues because there is a hell of a lot of potential there for a really interesting and multi-layered character but for some reason none of the stories I have read have really ignited the character for me.

The art however is really good and as a whole, since the 'New 52' revamp that seems to be one of the main selling points for the revamped characters.  Art wise, it seems to get better with each issue of each character that I seem to be picking up so kudos for that.

All in all, while not the most exciting issue in the world, neither is it the worst.  Maybe just one for the completists.