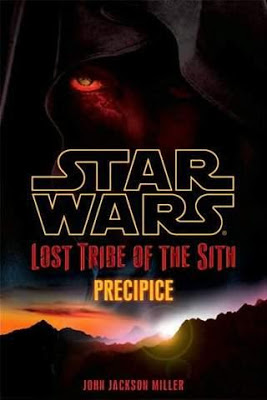 For the ruthless Sith Order, failure is not an option. It is an offense punishable by death-and a fate to which Commander Yaru Korsin will not succumb. But on a crucial run to deliver troops and precious crystals to a combat hotspot in the Sith's war against the Republic, Korsin and the crew of the mining ship Omen are ambushed by a Jedi starfighter. And when the Sith craft crash-lands, torn and crippled, on a desolate alien planet, the hard-bitten captain finds himself at odds with desperate survivors on the brink of mutiny-and his own vengeful half brother, who's bent on seizing command.
No matter the cost, Korsin vows that it will not be his blood and bones left behind on this unknown world. For the way of the Sith leaves little room for compromise-and none at all for mercy.

I am a massive science fiction nut, as you have no doubt guessed from some of my reviews.  'Star Wars' has always been one of my favourites even after the dreadful 'The Phantom Menace' movie.  I just sat back and hoped that with the many different graphic novels, games and novels coming out that it would soon recapture the magic of the original trilogy that sparked my life long love of science fiction.

This short story isn't one of those, however that's not to say that it's a bad release at all.  It just gets a bit mired down in the details at times.

One of the main faults is a necessary one unfortunately.  'Precipice' is the first of eight, at the time of this review going up, stories detailing a group of Sith that have crash landed on planet and end up fighting for survival and that leads to a bit of a problem.  There are way too many characters introduced with little time for us to get to know or care about what happens to them.  This leads to the story being rather jumbled and confusing at times, which considering that it's a quite short release, that's quite damaging to the story itself.

However, it's not all bad.  The writing here, despite the flaw I mentioned earlier, is really well thought out and, even with all it's problems in the 'cramming too much in' area, I still want to get to book two.

Without the need to get all the characters introduced, the second story should flow a lot better but that is thanks to this story.  The flaw may be a major one but if the release had have been a full length book, it may not have been so damning or noticeable and the writer could have taken more time with the characters.

The best way to describe this addition to the 'Star Wars' world would be that it's 'Lord of the Flies' but set in George Lucas' world.

While the story in itself is a good one, the need to cram so much in does hurt the rating in all honesty.  That said however, I did enjoy it for the most part.  Maybe this one will appear to the more hardcore fans out there.

Roll on book number two and let's see what happens to the characters next.

Please note this title is available for free on most E-Readers.  I personally got mine, along with books 2-6 for free on my Kobo.
Posted by Pat Scattergood at 12:08