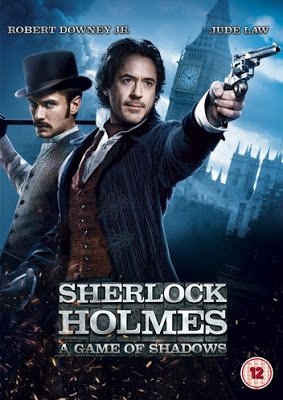 Robert Downey Jr. reprises his role as the world's most famous detective, Sherlock Holmes, and Jude Law returns as his friend and colleague, Dr. Watson, in Sherlock Holmes: A Game of Shadows.

Sherlock Holmes has always been the smartest man in the room...until now. There is a new criminal mastermind at large-Professor James Moriarty (Jared Harris)-and not only is he Holmes' intellectual equal, but his capacity for evil, coupled with a complete lack of conscience, may give him an advantage over the renowned detective.

Around the globe, headlines break the news: a scandal takes down an Indian cotton tycoon; a Chinese opium trader dies of an apparent overdose; bombings in Strasbourg and Vienna; the death of an American steel magnate... No one sees the connective thread between these seemingly random events-no one, that is, except the great Sherlock Holmes, who has discerned a deliberate web of death and destruction. At its center sits a singularly sinister spider: Moriarty.

Holmes' investigation into Moriarty's plot becomes more dangerous as it leads him and Watson out of London to France, Germany and finally Switzerland. But the cunning Moriarty is always one step ahead, and moving perilously close to completing his ominous plan. If he succeeds, it will not only bring him immense wealth and power but alter the course of history.

I have to admit that when I heard that Guy Ritchie, of 'Lock, Stock and Two Smoking Barrels' fame, was the guy chosen to direct the new Sherlock Holmes movies I was very hesitant to see them due to the simple fact that his work is mostly style over substance.

Has he changed my mind with this, the sequel to the 2009 movie?  Well yes and no.

Let's start with the good stuff.  The cast is superb.  While Sherlock himself is a little too 'one liner' as a character in this movie, Robert Downey Jr. does an absolutely brilliant job of making the character jump off the screen at the viewer.  Jude Law, who I've never been that big a fan of, is spot on with his portrayal of Watson as well.  The relationship between the two of them is just like an old married couple who bicker all the time yet quietly respect one another.

The revelation for me however was the addition of Jared Harris to the cast.  His turn as Professor James Moriarty is incredibly menacing.  Not only is he Sherlock's mental equal but also his lack of conscience is a constant remember of the evil that men can truly do to one another.  He really does have his father's, Richard Harris, knack for knowing when to speak and when to let his reactions and facial expressions do the work.  I, for one, will definitely be on the look out for his other work.

Stephen Fry was a riot as Mycroft Holmes, Sherlock's brother.  In equal parts seriously deadpan and other parts hilarious, his role is definitely one of the highlights.  However one of his scenes made me glad it wasn't filmed in 3D.

The movie itself looks absolutely amazing.  The settings are used as if they are part of the character list itself and that really adds another layer to the movie.

However there are a few things that do let the movie down a bit.

Noomi Rapace isn't really given anything to do other than wear a hat, be female and do a bit of running around, which is a shame because shes a really good actress.

The writing itself tries to be too clever at times and ends up tying the plot in to knots yet still leaves some loose ends.  I suppose they'll get answered if there's a third movie but it still kind of bugged me a bit.  However I did really like Moriarty's plan but I won't spoil that for you here.

One of the things that really annoyed me about the filming of this movie was the massive overuse of slow motion that Guy Ritchie seems to have an obsession with.  The slow motion works brilliantly well in the forest case scene where shells are going off all around the characters but some of that effect was lost because of it's overuse in the rest of the movie.

Another thing that bugged me was Sherlock Holmes knowning a form of Kung Fu.  In the books he is an accomplished boxer and cane fighter so why not just use that instead?  It just didn't look right for the character.

All in all, while not a terrible movie it still wasn't a great one either.  That's a real shame because the cast do an amazing job with the, sometimes clunky, dialogue that they have.  Still worth a look even if only for the, nearly, always brilliant Robert Downey Jr.

Posted by Pat Scattergood at 11:33