She Hulk: Volume 5 - Planet Without A Hulk Graphic Novel Review 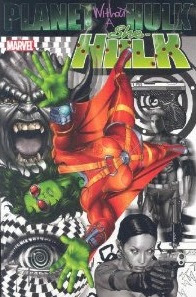 
Now that the Illuminati have shot the Hulk into space, who's going to fight all of his bad guys? Enter She-Hulk: Agent of S.H.I.E.L.D.!

Spinning out of events from Civil War and Planet Hulk, the new director of S.H.I.E.L.D. is shipping She-Hulk off to Hulk-related hotspots around the globe - where she'll be taking on villains from A-Z! Or, in this case, from the Abomination to Zzzax! That's right, gamma-fans, it's the Emerald Amazon in her most action-packed adventure ever!

Plus: "Everything You Ever Wanted to Know About Awesome Andy but Were Afraid to Ask." Ever wonder how the Mad Thinker's Awesome Android became Awesome Andy? It's the origin you never expected - complete with a bombastic battle against the Mighty Thor! And an ending that'll knock your block off!

Set during the Planet Hulk story arc, this collection tells the story of The Hulk's cousin, Jennifer Walters, otherwise known as She-Hulk.

The collection starts with a tale about how The Mad Thinker's Awesome Android became Awesome Andy. I can describe this pointless tale in one simple word. Skip-able.

Then onto the main tale itself. The world needs someone to fight all of The Hulk's enemies so in steps The She-Hulk, who in the mean time has become an agent of the group known as S.H.I.E.L.D.

The writing is incredibly pedestrian and just moves from battle to battle with some of the most inane dialogue I've ever read in a comic book. I know the language of the comic book won't be Shakespeare level or what have you, but this was just groan worthy in places. The supposed shocking twists and turns are so telegraphed that they aren't in the least bit exciting or surprising. The story picks up slightly when She-Hulk finds out who banished The Hulk in to space but that's short lived. After a couple of well written pages about her anger at the situation, it's back to inane dialogue and lazy scenarios.

The artwork itself is incredibly disappointing but that's near to the norm for Rick Burchett. His work is nearly always hit and miss. For each bit of great art there are loads of panels that are completely redundant or drawn poorly. How he continues to get so much work in the Marvel universe is honestly beyond me.

The reason I've rated the art a bit higher than I should have are the fantastic covers done by Greg Horn. Next to these, Rick Burchett's work looks quite child like.

All in all, this tale doesn't really know what it wants to be. At one point, it goes in to the psychological side of Jennifer being the She-Hulk although that is incredibly lazily written, which is a shame because that's a great idea. Then the next minute, they aim for a bombastic battle story where there is fight after fight against The Hulk's Rogues Gallery but even that is mishandled.

I'd avoid this in all honesty. The only saving grace to it, like I said before, are the great cover illustrations by Greg Horn.

Posted by Pat Scattergood at 09:56