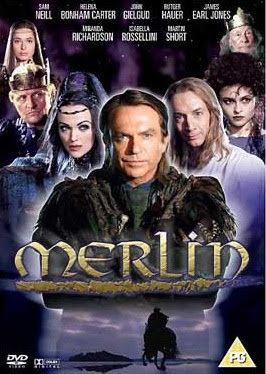 Before Excalibur, before the Knights of the Round Table, before Arthur, Guinevere, Lancelot and Galahad, there was a sorcerer shrouded in the mists of Avalon; this is his tale.

In a time long past, when magic was fading from the world, the wicked sorceress Mab, the Queen of Darkness, summoned forth a mighty wizard to keep the power of the Old Ways alive. The wizard's name was Merlin.

When his heart is touched by the love of the beautiful Nimue, Merlin turns away from Mab's dark enchantments. In anger Mab allows Merlin to be captured by Lord Vortigern (Rutger Hauer) and imprisoned with Nimue.

When Arthur is born, Mab immediately puts a curse on him. Allying himself with the young warrior who will rise to become the legendary King Arthur, Merlin pledges his mystic skills to Arthur's visionary cause: bringing peace and justice to a realm haunted by monsters and ravaged by war - and setting the stage for the ultimate clash of Good against Evil.

I've always loved the various versions of the legend of Merlin and I've always been a massive fan of Sam Neill since watching him in 'Jurassic Park' when I was younger.  When I found that the two had been combined in 1998, I couldn't wait to get my hands on a copy but did it live up to my expectations?

Some of the acting in this is really poor and actually quite cheesy.  On the other hand however, that kind of adds to the charm.

The cast is incredibly eclectic to say the least.  You have Martin Short over acting his way through the part of the shape shifting helper to Queen Mab at each and every turn.  As the movie nears the end of it's run time, his performance really starts to grate to say the least.

Miranda Richardson is another one that sadly gives a bit of a sub par performance.   While her portrayal is fine for the character of the evil Queen Mab, it's the strange, deep voice that he puts on while playing her.  It's also the fact that the voice seems to come and go at random points as well, which is a shame because Richardson is a very good actress.

The rest of the cast do give good performances.  In fact, much better performances that are normally in the mini series' that Hallmark make.  Sam Neill is by the far the best of these giving a majorly strong and yet sympathetic portrayal of Merlin.

It's true that the story doesn't really stay all that true to the original legend, adding new characters and taking old ones out, that's the point of artistic license isn't it?  Not every portrayal is going to follow the same road and if they did, it would all get rather boring.

The special effects are actually pretty good for a Hallmark mini series.  Not up to the mega special effects that you see in todays blockbusters but neither are they the horrendous effects seen in movies such as 'Journey to Promenthea' that looked like they had been done on an 80's computer.

All in all, if you want a good and relatively fast paced fantasy adventure featuring the legendary wizard Merlin, then you could do a hell of a lot worse than this release.

Posted by Pat Scattergood at 04:04