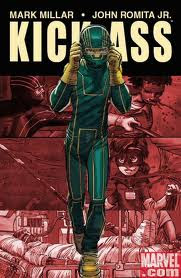 Dave Lizewski is just an ordinary American teenager; he has a MySpace page, loves comic books, and is unable to find a girlfriend. Then an idea hits him: why not become a real life super hero? His life will never be the same again...

The original comic book series that spawned a very successful movie in 2010 by Mark Millar and John Romita Jr.

While the movie wasn't very faithful to the comic books, it was still a great movie. A lot of the differences are quite noticeable but I won’t spoil them here because they really add to Lizewski’s feelings of uselessness. In fact, they just add more reasons to root for him.

The humor here isn't subtle in the slightest but it is very funny.  In fact, it really can't be classehed as anything other than getting hit over the head with a hammer kind of funny.

There are some brilliant satirical jokes at superheroes here as well as poking fun at peoples perceptions of comic book fans.  While some of the jokes aren't original they are incredibly funny.

The pacing here by Millar is superb and really up there with some of the best of his career.  The action really cracks along at a breakneck pace but amazingly that doesn't affect the growth of the characters.  You really do get to know the characters and  their motivations all while the action is kicking off all around them.

The artwork is absolutely superb but I wouldn’t expect anything less from the talent involved. The colors absolutely fly off the page as does the violence and comedy. In fact, I couldn’t wait to turn the page to see what happened next.

I have to admit that I preferred Big Daddy’s costume in this to the one he sports in the movie. Here, his costume looks really basic and amateurish and that just adds to the point that he’s just a normal man looking for revenge. That to me was much more affective than the Batman style costume that he sported in the movie.

All in all, a graphic novel destined to be a cult classic for many years to come.