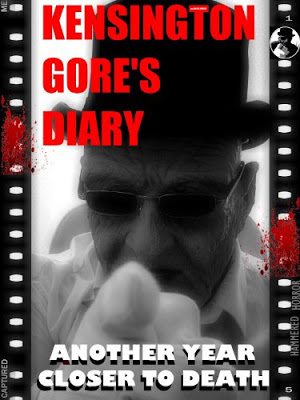 Kensington Gore is Hammer Horror’s last great writer/directors he describes himself as an iconic leg end. He’s a fiery flamboyant character that some might find scary and shocking. He's old school, controversial, a little offensive and so NOT PC!

His diary, Another Year Closer To Death, offers us a privileged glimpse into his life as he struggles to get his last great horror movie off the ground. He fights to come to terms with old age and being dumped on the movie scrapheap. Most importantly of all, his attempts to keep his beloved wife Marge, a former movie siren, in the lavish lifestyle she is accustomed too.

Another Year Closer To Death is at times a touching, gritty, very funny and comedic look into the life of an old dog that refuses to be taught any new tricks and just will not lie down.

Kensington Gore is, without a shadow of a doubt, a completely un PC national treasure so when I bought this book, I was very excited about it.

Telling the story of Gore coming out of retirement to make one last movie, along with many other adventures featuring his wife, Marge and a merry band of misfits including a pig called Bacon Sandwich.

The stories here are varied to say the least but all are told with Gore's trademark wit and humor.  While gloriously politically incorrect, the stories really do have a good heart and sense of fun to them.

Each character is as hilariously insane as the last.  The best of these is definitely his wife Marge, who really comes across as the ying to Kensington's yang.  Their relationship put a massive smile all on my face all the way through the book.

While the book itself is an absolute laugh riot, there are many pearls of wisdom spread through out the book.

I especially liked the hearing about his experiences in the world of reality television as well as  the various stories about how he was trying to get funding for his movie in this economic environment.  Those stories really showed his sheer tenacity and determination and that adds another layer to a brilliantly written and insanely entertaining autobiography.

I for one, definitely want to see what this year is going to bring for Gore because then there will hopefully be another one of these diaries.

One for everyone who want to see in to the world of Kensington Gore.  Not one for the easily offended but well worth a look.

Posted by Pat Scattergood at 12:16