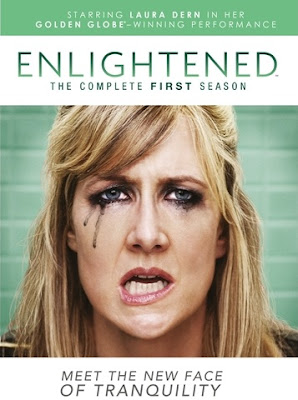 An HBO original series from creators Mike White and Laura Dern, Enlightened stars Dern in her Golden Globe - winning role as Amy Jellicoe, who comes home to California after a stay at a holistic treatment facility, the result of having a mental breakdown at work triggered by her self-destructive ways. Amy returns to her old life with a new cultivated approach and perspective, involving daily meditation and inner healing. She moves in temporarily with her somewhat estranged mother (Diane Ladd, Dern's real-life mom), and reconnects with her ex-husband, Levi (Luke Wilson), who is struggling with his own demons and addictions. Amy is rehired at Abaddonn Industries, but assigned to a demeaning position. There Amy uncovers corporate abuse and corruption that fuels her quest to make a change in the lives of others. But although Amy wants to be an "agent of change" in the world, those who know her best are skeptical of her latest intentions.

I have to admit, when I saw the first episode I wasn't really all that sure what to make of it.  Did I like or didn't I?  Will I stick with it or won't I?

Well I'm pleased to say that I stuck with the series and I'm incredibly glad that I did.  It's packed full of some great performances, hard hitting storylines and some moments that had me laughing but then crying in equal measure.

It's very easy to see why this show was a hit at the Golden Globes awards.  The cast do a fantastic job and really make the characters realistic, true to life and really make you want to get involved in their lives.  That's down to the brilliantly original and intelligent writing by Mike White and Laura Dern, both of whom star in this series.

As someone who suffers from sever depression myself, this series really manages to take a realistic look at someone who suffers from the same problems while trying to juggle a job and stay optimistic.  Not once does it make the main character one to poke fun at.  Instead it takes a really good and hard look at the different ways she is treated when she comes back to work after being treated for a breakdown.

The adverts for this series made it look like a full blown comedy but it's much more than that.  It's a drama first and foremost but with some funny moments in.  Once you're settled in to watching the series you can't just watch one episode.  You end up watching one, then another one and another one until you find yourself at the end of a disc.  I haven't done that with a series in a very long time.

For me, it's the performances that have made me stick with this series.  Laura Dern as Amy gives an incredibly strong and very brave performance as someone who struggles with depression and mental health issues without it being an over the top melodrama.  Her Golden Globe winning performance is most definitely well deserved.  The rest of the cast really live up to the high standard set by Dern's performance.  Her real life mother, Diane Ladd, plays her mother here as well and that really gives a fantastic insight in to their relationship.  The way her mother reacts when she comes home or when she tries to talk about her problems is very true to life, speaking from past experiences, and the fact that they are related in real life really give their performances another layer to work from.

One of the main strengths of this show are the supporting cast as well.  Normally in one of these sorts of television shows the background cast doesn't really stand out that much and a lot of the time are largely forgettable.  Not here.  Far from it.  Here each character, no matter how minor, has their own motives and personalities and each one is as memorable as the last.  My favourite being Mike White, one of the creators of the show, as Tyler, who really comes across as someone who tries so hard in life but just can't catch a break only to become friends with Amy and they both start to help one another in various ways.

Luke Wilson as Amy's ex husband is another fantastic addition to the cast and really plays the part of someone fighting his own demons, in this instance it's addiction, very well and the scenes he shares with Dern are very powerful.

All in all I would highly recommend this series as well as urging you to stick with the show.  It might not be a show that you're used to seeing but believe me, it's worth sticking with.

Posted by Pat Scattergood at 03:45