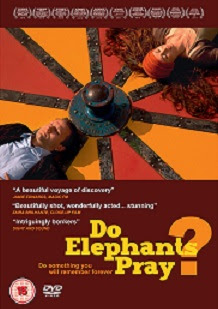 Frustrated by the soulless routine world he is shackled to and dogged by a need to find meaning in everything, the life of advertising executive Callum Cutter is thrown into poetic chaos when he meets the free-spirited French seductress Malika who promises to change his life forever...providing he keeps her identity a secret.

I have to admit that because I'm a big Marc Warren fan that I had really high hopes for this movie.  Were those hopes justified or did they did dashed?

Well, yes to both.  And yes I know that sounds confusing but let me explain myself here guys (and girls).

This isn't a bad movie but neither is it a good one either.

The story itself is quite simple but effective in places, although it is a little let down by some quite sub par performances.

Marc Warren gives by far the best performance of the cast here as the obnoxious boss who makes Callum's life a living hell.  It's his performance that really puts the feeling of being trapped in a deadend job across and he does it very well.  It's a bit of a shame however that a good performance is trapped in such a hit and miss movie.

The other performance that impressed me was the part of Malika played by Julie Dray.  Her portrayal was a mix of spiritualist and hippy but without going over the top.  She also ended up having some of the best lines in the movie as well.

In other parts of the movie, the dialogue came across as quite clunky and stilted.  In fact, some of the lines felt like they came out of one of the myriad of self help books that seemed so popular a couple of years ago.

For the most part the movie comes across as trying to be quite a brave attempt at a movie exploring the spiritual side of life yet the execution of it just seems to let it down and reduces it to a 'by the numbers' movie about someone trying to find themself.  That's a real shame because there are some really good performances here.

All in all, while not a bad movie this isn't exactly one to get excited over seeing.  It's more of a background movie.  One to watch if there's nothing else or even one to watch while you're doing something.

Hopefully the next thing I see Marc Warren in will be a lot better because a man of his talent deserves to be in a much better movie than this.