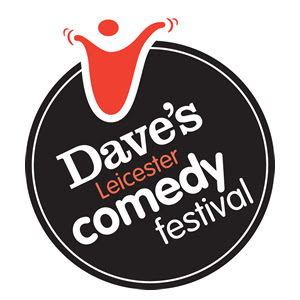 In a nod to  the classic television series fronted by Cilla Black, Dave's Leicester Comedy Festival present to you a festival first.  Comedy Blind Date!

3 comedians compete against one another to land a date with a single lady, trying to win her over with smart answers and quick fire comedy.

But who will win her heart and a free curry?

For Valentine's Day this year my fiance decided that going to this along with some of our friends would be a great way to spend the evening and you know what?

She was completely 100% right.

Hosted by the brilliantly funny comedian, David Morgan, we were treated to an evening split in to two distinct parts.  The first gave each comedian ten minutes to show us some of their routines to, as David Morgan put it, "prove that they are funny" and that really kicked the evening off fantastically.

We started off with Ahir Shah's strange but intelligent brand of comedy.  While it didn't completely click with all of the audience I did enjoy his intelligent monologues.

Next came a comedian all the way from Denmark named Valdemar Pustelnik.  A large mammoth of a man with a viking like beard couldn't be more different from Shah if he tried.  His quite bitter but incredibly funny brand of humor really got the crowd warmed up and eager to see who the third comedian was.

That's when we were treated to the absolutely brilliant John Kearns, complete with false teeth and monk like wig, who proceeded to have the crowd in tears of laughter.  At one point he even had a 16 year old lad on stage because the lad had said he was taking pictures for the 'Citizen's Eye'.

After the inteval we were then introduced to the three comedians again before the single lady, Kate came out to ask the questions.

Shah really shined in this part as his monologues complete with Feudian references had me in stiches but also the other two comedians then proceeded to mock him for his answers.

Pustelnik was hilarious with his answers too especially when he started to mock Shah for his 'guns' after Shah had taken off his jumper.

However it was once again Kearns who stole the spotlight.  His answers flitting between angry / bitter to off kilter and weird really had the crowd in hysterics on more than one moment.

When the moment came for Kate to choose she decided to go with Kearns, much to the amusement of the crowd.  Her facial expression when she saw him with his false teeth and wig on was just pure comedy gold.

All in all, this was a fantastic evening superbly hosted by the very funny David Morgan.  Hopefully Dave's Leicester Comedy Festival will do this again next year.  If they do, I will most definitely be there to see it.