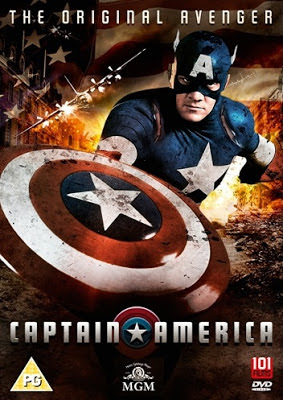 After racing to Germany to sabotage the dastardly plan of insane Nazi baddie "Red Skull", Captain America winds up frozen in ice until he is discovered 60 years later. He reawakens to find that the Red Skull has changed identities and is now planning to kidnap the President of the United States and start World War 3!!

Review
I'm not really sure what to call this rancid turd of a movie but Captain America isn't it.

After enduring some of the worst dialogue I have ever heard in a movie, I was willing to go through it to see the man himself, Captain America. Wow, was I ever disappointed but I'm jumping ahead of myself here.

There are many new and interesting things wrong with this movie.

Secondly, The Red Skull. Firstly he's an Italian orphan kidnapped by Nazi's and turned in to the Red Skull. Those kind of liberties in a movie I can deal with. The thing I can't deal with is the simple fact that for 98% of the movie he's not even The Red Skull. He's a man who has facial surgery to look normal and become a mob boss. I'm pretty sure whoever wrote this has never read a single Captain America comic book in their entire life.

In all honesty, this entire movie just feels like they were winging it and making it up as they go along.

One of the weirdest things I've ever seen in an entire movie is one part of Captain America's costume. It has FREAKING RUBBER EARS! I get that they had to work around the fact that the mask hurt Salinger's ears when he wore it but they don't even match his skin tone AND they don't even look like ears in most of the scenes. They just look like badly shapened bits of plastic.

Lastly, movie wise, what the hell is up with Captain America doing the "hey look over there" and then running away when the person is distracted? What is he? 12?

Another thing that made this release a complete waste of money is the transfer. The sound is tinny and sounds like it was recorded on an old 8 track. The picture transfer is even worse. It's so piss poor and blurry in places that you can't even see what is going on sometimes, although believe me that's a blessing with this movie.

In all honesty, I've seen better transfers on Buster Keaton movies from the 20's and 30's!

The only plus point to this was seeing Bill Mumy, famous for his role in Babylon 5 as Lennier, as the young General Fleming.