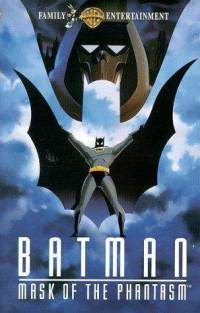 
When the Gotham's most feared gangsters are systematically eradicated, the Caped Crusader is blamed.

But, prowling the Gotham streets is a shadowy new villain, the Phantasm, a sinister figure with some link to Batman's past. Can the Dark Knight elude the police, capture the Phantasm and clear his name?

Review
The 1990's art deco style Batman series by Bruce Timm is what reignited my obsession in Gotham's Dark Knight himself. The stories were easy enough for the youngsters watching to understand yet exciting and full of enough twists and turns for the adults watching to be enthralled too. In fact, I honestly don't think we've had a series that good since.

The Mask of the Phantasm is also known as Batman The Animated Movie in some markets but whatever it's called, it's a seriously good quality of movie. I honestly believe that if this had been one of the live action Batman tales we've been treated to that maybe it would be taken more seriously yet because it's animation, it seems to have been quite severely under rated.

I find it much better a fit for the Batman / Bruce Wayne characters here than any of the live action movies except for maybe the Christian Bale portrayal. In fact, the story itself it one there with the best too. Some places may be deemed a little too adult for the really young ones out there, the slightly older children should lap this tale up, especially as it shows Batman to not be infallible. He really does meet his match against the vigilante known as The Phantasm.

The animation itself is definitely some of the best I have seen from the series itself and the characters all stand out beautifully. The transfer really does do it justice, it's the same with the sound. You can really hear the background sounds of the city as if they are completely separate characters. It really helps the viewer to get involved in the movie.

The only disappointment with this movie is the distinct lack of extras. Not even an introduction to the movie or a commentary. The trailer for the movie is advertised on the back of the box as a special feature yet it's nowhere to be found. Majorly disappointing on that front.

Other than that relatively minor flaw, although like I said I would have loved to see some behind the scenes stuff or even just a commentary, this is an absolutely top class movie.