An Interview With Kensington Gore 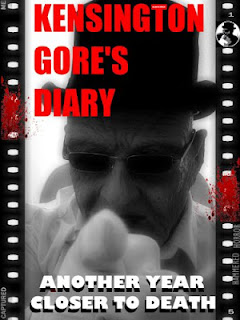 Kensington Gore has scared the hell out of us with his movies for years and has now taken the time to speak about his books and his rather unique outlook on life, thanks to my talent of luring KG in to a bar with the promise of free drink and peanuts.

PC: Firstly, thank you Mr Gore for speaking to us here.
KG: At my age, I'm happy to be able to speak without a voice box thing, or one of those things that 'Screaming Stephen J Hawkings" uses. You know the kind that makes him sound like a drunk Dalek?

PC: You are a unique man in a world of stereotypes and a British Institution but how would you describe yourself?
KG: I am an original. I am unique. I never repeat myself. Did I tell you I’m original?
I don't like to describe myself as an "institution" though my wife Marge, says I should be in an institution. She also calls me a bit of cult, I think that's what she says.
I don't mind swimming against the tide, forging my own path, I'm my own master, and like any other men I do exactly what my wife wants.

PC: After turning your hand to writing, we have had a diary, various scary stories, a children's Christmas story and even a joke book! Is there anything you won't write?
KG: Well I don't like to write cheques, shopping lists and Christmas cards. My good lady Marge, she that I like to disobey, she looks after all the sort of day- -to-day things.

Creatively speaking, I'm a cunning linguist, I'd like to write some poetry, show my softer, more romantic side. Some love stories. I've written songs, even did a bloody rap I published in my Diary - Another Year Closer To Death. I'm bloody still waiting to hear back from those 50 pence and M & M chaps.
I've done scripts of course; too bloody many to mention. I've breathed life into more dying scripts as an unnamed, badly bloody paid script doctor than that Dr Kildare shagged young nubile nurses.
He might be too old for your age group dear boy, who's that one with the limp and the dodgy American accent, looks like Hugh Frying Lorry. House! Bingo!! That's the chap! I've popped more pain killers than he's had hot dinners.

PC: You are very in touch with your fans but has this led to any strange stories or occurrences? In fact, what would you define as strange?
KG: What I define strange some people see as the ordinary. What I define as ordinary some people see as very strange. We all live in a strange world it just depends how we feel about it.
In my prime I've had young ladies dashing up to me wanting me to sign their breasts, and back in those days, there were no implants much harder to write on. You can bounce your Bic off some of these inflated basketball-sized breasts and have your bloody eye out!

PC: How would you sum up your life in 40 words or less?


KG: Born, grew up, lucked my way into films, worked magic on a shoestring, touched and scared people in a good way, grew old disgracefully, now I want to spread a bit of gore and laughter before I pop my clogs.

PC: What's next for Kensington Gore? Any sign of slowing down and getting the pipe and slippers out?
KG: Never, the Grim Reaper's never going to find me with my blood feet up. I've got more things on the go and working harder than a one-armed plate spinner.
I have, my film "Werewolves of London" script ready to go, hoping to get some backing so any crazy millionaires send me some big cheques. I plan to do another diary, it's kind of yearly thing but I want this to make more of a film making shooting diary. Pay it back, educate these young whipper snappers, these George Lucases and Steven Spielberg, show them I'm not an old has-been, plenty of bark in this old dog I can tell you.
I have my joke book that I co-wrote with the very talented young writer Leesa Wallace, she has me in stitches, she's very violent if she doesn't get her jokes in.

Seriously she's a pussy cat.
I like to give young writers a hand up and not just young ladies.
I'd love to write a sex guide with Marge thing is I need Viagra these day to act as a book rest!
I'm doing three short stories with a love connection, was wanting that out for around Valentine's Day but because of ill health I've had to move back a bit.
I'd like to write a novel, maybe even a novelisation of one of my films. I hate it when they get some ghost writer messing with one's work. If I wrote it, I'm the one going to bloody cock it up in a book!

PC: Finally, do you have last words for your fans out there?
KG: (sings)" So long, farewell, Auf Weidersehen, adieu, for you and you..."
Seriously, keep a little Gore in your life. Reach for the stars but don't let your pants fall down in the process!


PC: Many thanks for taking the time to talk to us here today, it's been a pleasure.
KG: You're welcome, now where's this free bar you mentioned?

PC: And that my dear readers is all I remember of the evening other than waking up in a wheelie bin wearing a traffic cone with a Superman action figure glued to my hand...

Both 'Another Year Closer To Death' and 'Kensington Gore's Dead Funny Joke Book' are both available to buy now, along with 'Peter Peter Pumpkin Eater' and 'Bet Your Life' also available.

Posted by Pat Scattergood at 07:42