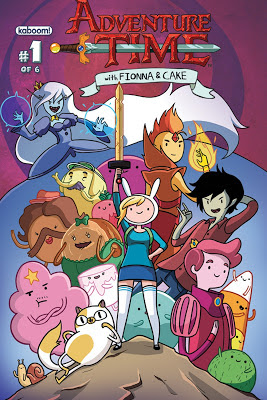 Adapting Pendleton Ward's incredibly popular shows are a bit like eating a Marmite sandwich.  You will either absolutely love them or you will hate them.

The adaptation of the original 'Adventure Time' was incredibly well done, well drawn and really kept the feeling of the cartoon through out the entire comic book.

Here we have a comic book starring some characters from a spin off of that series.

You might just think that these are the characters that you are used to but with their sexes reversed but that would be doing these characters a massive detriment.  Take the main characters for example.  Finn is confident and brass but Fiona is a bit more shy and prone to doubting herself.

Yes it's a mirror of the original universe but the characters themselves are completely different and I think that Natasha Allegri does a truly fantastic job of getting that across the page.  The characters just fly off the page art wise and storywise, they are so true to the cartoon itself.

This issue starts with a beautiful fairy tale style story that I was completely not expecting but then jumps straight in to the 'Adventure Time' world and I loved the sudden change of pace.  In this six issue run, if the stories stay up to this standard then I, as a fan, will be more than happy.

I've not really said that much about the story itself but that's just because I don't want to ruin any of the surprises for you guys but believe me, it's worth it.

If you are a fan of the cartoons or of Pendleton Ward's work then you will most definitely love this one and I for one, will definitely be getting my hands on to issue 2.