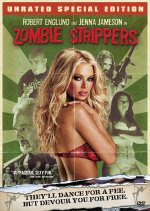 When the exotic dancers of Sartre, Nebraska, begin getting zombified, it's up to a few of their own to save the day. Jay Lee (The Slaughter) wrote and directed this blood-and-boob-filled satire.

Review
A secret government agency accidentally lets out a chemical virus that can reanimate the dead that was originally created to bring back dead marines. One of the soldiers sent to contain the virus gets bitten and ends up in an underground strip club called Rhino’s. He dies and comes back to bite one of the main strippers. Much to the owners surprise, she becomes more popular a dancer as a zombie and thus he turns a blind eye when the other strippers first get bitten and then to the growing bodies of dead punters.

Let me start by saying one thing. This is not a great movie by any stretch of the imagination but bloody hell, it’s a fun one. What else can you expect from a movie that has “They’ll swallow your soul. Anything else will cost you.” as it’s tag line?

Robert Englund, of Freddy Kreuger fame, absolutely hams it up to the maximum as the owner of the club. His OTT delivery of his lines and his performance really add to the over all camp factor of the movie.

Jenna Jameson is actually pretty good as Kat, the main stripper. While she won’t win any awards for her performance, she’s hilarious in her role. Her fight involving a zombie and some pool balls is one of the funniest and crassest things I have in a long time.

Some of the political gags and inside jokes do grate a little at times but overall, it’s a very fun movie to watch if you are able to turn your brain off and just chill out.

Due to the movie being filmed on video, some of the scenes do struggle a little bit but it kind of adds to the overall feel of the movie itself.

The sound however is a lot better. I honestly can’t fault it at all.

The extras are actually as fun as the movie itself. Hell, watching the behind the scenes stuff really shows just how fun it was to make this movie.

I would honestly recommend this movie to anyone that just wants to leave their brain at the door and just have some simple and hilarious fun.
Movie 3.5/5
Picture 3.5/5
Sound 4/5
Special Features 4/5
Overall 15/20
Posted by Pat Scattergood at 14:09