Win A Copy of 'The Aylesford Skull' by James P. Blaylock! 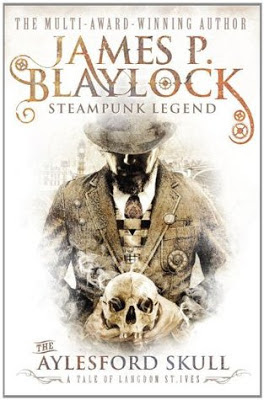 This competition is now closed.  Well done to the winner!

To win a copy of the first full length steampunk novel by James P. Blaylock in twenty years simply answer this simple question.

James P. Blaylock has written two other full length adventures featuring Langdon St. Ives.  One was named 'Homunculus' but what was the other one?

Send your answers to patrickstevenchallis@gmail.com with the subject heading 'Aylesford Skull' and the winner shall be picked at random.

This competition is open to UK residents and the closing date for all entries is Friday 1st of February 2013.

"Blaylock is a magician!"  — Michael Swanwick, author of Stations of the Tide

“The master of the offbeat and absurd” — Washington Post

In this long-awaited new adventure, brilliant but eccentric scientist and explorer Professor Langdon St. Ives is plunged into the dangerous underworld of 19th Century London’s when a grave in Aylesford is exhumed and its contents stolen by the infamous Dr. Ignacio Narbondo. Blaylock writes: “St. Ives’s quest leads him from a darkly strange commune of spiritualists and clairvoyants in rural Kent, through the foggy depths of the Cliffe Marshes and the lairs of smugglers and pirates, and into the sewers, lost rivers, and sorcerous underworld of London.”

To celebrate this major literary event, a limited run of 750 copies of The Aylesford Skull is available in a jacketed, signed hardcover with a unique jacket design. The special edition boasts a Foreword by K.W. Jeter and an Introduction by Tim Powers as well as a tip-in sheet signed by all three founding fathers of modern steampunk.