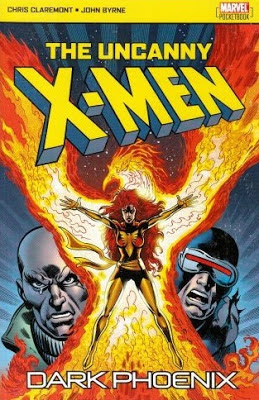 
For years the mighty X-Men have protected a world that hates and fears them.  Now they face their greatest challenge!

One of their own members, Jean Grey, has gained more power than she could ever have hoped for.  The downside is that it has corrupted her to her very soul.  Now the X-Men have to decide what's more important.  The lives of the  entire universe or the life of the woman they all cherish as one of their own!

The Dark Phoenix saga is one of the most well known and well respected tales in the whole history of the mighty X-Men. Incredibly inspirational for a lot of writers and artists these days it's amazing that a story from the 1979-1980 stage of the X-Men's tales still resonates so well today.

This edition collects the issues 129-137 of the Uncanny X-Men comic series by the dream team of Chris Claremont and John Byrne. During their time together they created some very exciting and hard hitting stories through their tumultuous pairing. This is by far their opus, their masterpiece.

The story itself is well known through comic book fans. Jean Grey, once known as Marvel Girl is now known as Phoenix. Suddenly, and through manipulation, her powers explode and over take her, turning her in to the Dark Phoenix. The power absolutely corrupts her and she turns on those that have protected her with shocking events.

Throughout the story Claremont/Byrne do create many twists and turns. They also bring in to some new characters in to the X-Men universe, with varying degrees of success.

Dazzler, a mutant, is the weakest of these but still plays a good part in the storyline yet without leaving taking too much of the focus away.

Kitty Pryde, another mutant, is a very successful addition and is still in and out of the X-Men tales now. Her addition really speeds the story along brilliantly without making her into a stereotypical damsel in distress.

The major addition is The Hellfire Club. A legit club for the wealthy of the city, there's a mysterious inner circle comprised of some men with some dark secrets and schemes. They truly were the best addition to the story and for once, were villains that could match the X-Men power for power.

The ending is still as hard hitting now as it was in the 80's. While the beginning part of the tale doesn't live up to the ending, how could it with an ending like that?

The artwork is flawless and really makes the action and even the quiet scenes pop off of the page at the reader. The little details here and there really add to the general dark feel of the story and ramp up the tension until the nerve shredding ending.

The only complaint I have is that some of the scenes haven't aged very well although the tale itself is over thirty years old. The only other complaint is that there a couple of inconsistencies in the writing. For example Colossus at the beginning of this edition says that he was responsible for the death of Proteus. Yet later on in the story when he is facing off against the Dark Phoenix, he says that he has never killed someone. That's just a minor complaint however.

This, even though it's over 30 years old, is still an absolutely essential purchase for anyone that is an X-Men fan or even someone who just likes a good tale.