The Shadow Special Issue 1 - Veterans of a Foreign War Review 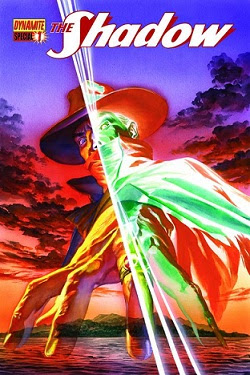 The Shadow knows what evil lurks in the hearts of men. But when Lamont Cranston crosses paths with an old friend--a fellow veteran of "the war to end all wars"--Cranston's justice serving alter ego must judge a man whose path to villainy began with their friendship! At the risk of his own secrets being laid bare, Cranston accepts an invitation to join a very exclusive club of adventurers whose dark hearts might be the worst The Shadow has ever encountered!

The Shadow Issue 1 - Veterans of a Foreign War is a standalone title and while not earth shattering, it's still a very good addition to the library of The Shadow stories that are out there.

The first thing you notice with this special issue is the sheer difference in the artwork.  Whereas the other issues have had artwork that is dark and grimy, this one is the complete polar opposite.  Normally that would annoy the hell out of me as a fan but here, it works.

Roman Cliquet does an absolutely fantastic job with his artwork making it both look classic and like it completely belongs with the rest of the Shadow issues.  I absolutely loved how well the panels flowed and his sheer amount of detail yet use of simple detailing really made me eager to turn the next page to see what the next ones were going to look like.  This is definitely most apparent in the ending that is very well drawn and grips the reader in a vice.

The writing by Scott Beatty has a quite film noir style to it and that really suits the characters because of one simple fact.  Beatty manages to stay away from the awful cliches that seem to plague stories set in this time period and makes the dialogue flow naturally as if you really are there watching the conversations unfold.  The story itself is exciting and fast paced while giving a very interesting look in to the characters pasts, adding some nice details but without going overboard as well.

The cover by Alex Ross is definitely up to his normal high standard and is once again proof of why he is one of the best cover artists out there.

While not Earth shattering in it's execution, this is a fantastic addition to any fan of 'The Shadow' and even if you haven't read any of the stories before, there's something here for you.