The Road by Cormac McCarthy Review 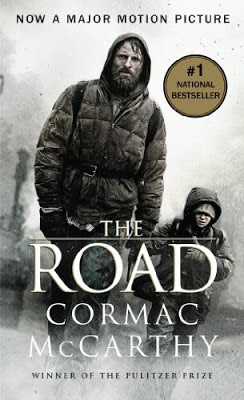 
Winner of The Pulitzer Prize for fiction in 2007, this is the story of a father and son walking alone through burned America, heading through the ravaged landscape to the coast.

It has been hailed as: 'the first great masterpiece of the globally warmed-generation. Here is an American classic which, at a stroke, makes McCarthy a contender for the Nobel Prize for Literature...An absolutely wonderful book that people will be reading for generations'

The Road by Cormac McCarthy has been very highly recommended by many different reviewers and has won copious amounts of awards around the world. It's easy to see why.

Written in a simplistic yet incredibly poetic way, it's that simplicity that really works in it's favor.

In a nutshell, a disaster has befell the Earth leaving everything dead and covered in ash. Amongst those dead things are a father and a son searching for food, shelter and any other things that they can find to help their slim chances of survival.

While not in itself a new idea, McCarthy's writing has taken a story and raised in to a quality all of it's own. The poetic prose of the writing itself helps the story flow along. While not a fast pace, it's subtle pacing slowly brings the reader in to the world that these characters inhabit without being too invasive.

One of the complaints I've seen about this book on other sites is that not a lot happens. Those reviewers are completely missing the point of the novel if they think that. The fact that the world has gone completely to Hell because of this disaster plays second fiddle to the beautifully written bond between the father and son on their journey. Yes there are flashes of violence or of the graphic aftermath of the disaster but because the reader is so interested in the father and son, these moments really come across as shocking and stay in the memory.

The bleakness of the novel is another thing that works in it's favor. Normally I've found that when I have read other novels of a similar nature, they also go for the happy ending or for the miraculous discovery of something that will mean everybody's survival. McCarthy has steered completely clear of this massively overused cliche. The ending, while having a tiny glimmer of hope, is just as sad and bleak as the rest of the book. However I don't think this hurts the story in the slightest. In fact, I think it raised the stories quality immensely because I, as the reader, came away feeling as if I'd been on the journey with them.

A book hasn't impressed me or stayed with me this much in a very long time so I honestly can't recommend it any more than I have. The only reason I've not rated it a five is just that the tone and the writing style may not be to everyone's taste but I enjoyed it and was glued to every page.

For once, here is a book that is truly deserving of every award it's gotten. Go find it and read it right now. It's honestly that good.

Posted by Pat Scattergood at 23:15