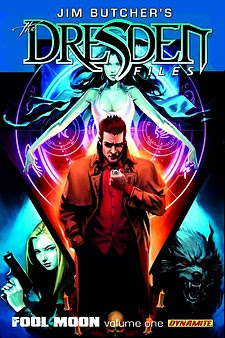 
A pack of werewolves have unleashed hell on the Windy City but as always, to Harry Dresden, there is more than meets the eye.

Before it's all over, Harry will find himself caught between friends, enemies and arcane forces bent on his destruction!

I'll be honest I've never seen the 'Dresden Files' television show or read the novels by Jim Butcher so I went in to this release with a completely open mind. After reading it I now want to get the novels and the television series.

The idea of someone having a supernatural power, in this case Dresden is a Wizard, helping a law enforcement agency isn't anything new yet Jim Butcher breathes new life in to what could have been quite a cliched story.

The character of Harry Dresden is a good creation in that he isn't the stereotypical good guy with supernatural powers. He has flaws, fears and somethings can be a complete twat yet also manages to be a character the reader can really get behind.

The story itself is fast paced and exciting. The ending is a great cliffhanger and I, for one, will be looking out for volume two. It's been a long time since I read a graphic novel and wanted to go out to get the next part as soon as I had finished it.

The art really works and fits well with the story. In all honesty I wasn't all that familiar with Chase Conley's work but his illustrations and the covers he drew, along with the two covers drawn by Brett Booth, really fit the theme, the characters and the settings like a glove. After reading this release I'm definitely going to be keeping an eye out for more of Conley's work as well as Booth's.

If you are a fan of the novels by Jim Butcher or of the television show adapted from those novels then you will absolutely love this graphic novel. If, like me, you hadn't seen anything of the character before then go in to this with an open mind because there is a massive amount of good quality here that has made a Dresden fan of this reader.