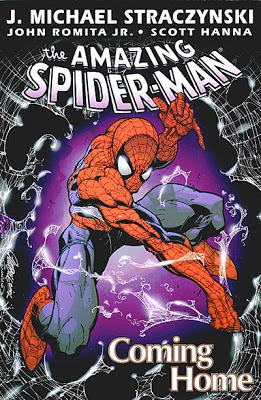 
Peter Parker has always felt alone.   Both as himself and as Spider-Man

A mysterious figure appear from nowhere and has incredibly similar powers to Parker himself.

Who is this person?  Who does he work for?  Who is the ancient evil that has come to America to find Peter?

When Marvel was making the first of the recent Spider-Man movies, they decided it was time to introduce ol' Spidey to a new audience. They chose Howard Mackie as the man to achieve this.

That, I think, was a major mistake. His tales of Spider-Man's exploits were, quite frankly, awful and nearly killed Peter Parker and his alter ego off.

A miracle was needed, or at the very least, someone who understood and cared about the mythology of the character all while adding a new and exciting spin.

That man was J. Michael Straczynski, creator of Babylon 5. On his own, the stories would have been great but when teamed with the legend known as John Romita Jr, the tales turned in to an unmissable event. You couldn't wait to see what would happen next. That's the main thing that was missing from Mackies work.

The personality and heart of the character has been portrayed here beautifully. Also, they have made Aunt May, who has always been a very weak and annoying character to me, in to a strong character. They did all this while introducing new and exciting characters as well as retaining some of the best characters from Spider-Man's rogues gallery.

The story itself is very well written. The addition of a character with the same powers as Spider-Man as well as the mysterious force known as Morun was a master stroke of writing genius. Unlike some new characters who seem a little 2D when added for the first time, Straczynski's additions are fully fleshed out with clearly defined motives.

The battle between Morun and Spider-Man itself is brutal and for the first time in a long time, the reader really believes that Spider-Man is truly in danger. No matter what he throws at his foe, he keeps coming back and beating him to an inch of his life.

The ending is brilliantly open ended and I can't wait to read the next tale yet has enough loose ends tied up to be a standalone tale too.

All in all, an essential purchase.

Posted by Pat Scattergood at 06:57