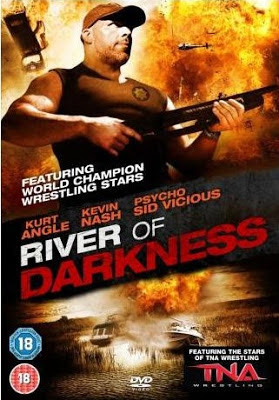 Dark action flick starring many of TNA's finest, including Kurt Angle and Kevin Nash (The Punisher). Small town sheriff, Will Logan (Angle), is forced to fight for his home town when evil arises from the murky river through the spirits of the murdered Jacobs boys, a trio of local squatters. Will is forced to uncover the town's corrupt secrets in order to save the local people from the boys' supernatural and chilling revenge.

I have seen some truly awful horror movies in my time, 'Mega Piranha' I'm looking in your direction, but this really takes the piss.

For a start the movie stars four very famous wrestling stars so I rather naively thought that would be it would have at least a modest budget. You have multi-time world champions Kurt Angle, Sid Vicious and Kevin Nash as well as a brief appearance by Ray Lloyd, who was better known as Glacier in WCW.

I was pretty much wrong. The movie itself looks like it was filmed on a camcorder or something, which leads to some of the scenes being so badly shot that you can't even see what the hell is going on.

The writing is so mundane that by the end of the movie you really couldn't give a rats ass what's happening.

Don't even get me started on the acting. It's absolutely atrocious. You can quite clearly see some of the cast reading their lines from a auto prompter or in some cases, bits of paper.

The only part of the movie that appealed to me was the addition of zombie movie legend Bill Hinzman but even he doesn't have a whole lot to do.

There is a great drinking game that you could do with this movie if you are so bored that you want to waste 90+ minutes. Every time Kurt Angle does a really random facial expression, take a drink. You'll pretty much be wasted in about 25 minutes and that may, if you're lucky, make this piece of crap watchable.

Do I recommend this? Hell no. I would rather watch 'Mega Piranha' on repeat for the rest of my life than have to sit through this crap again.

Posted by Pat Scattergood at 06:49