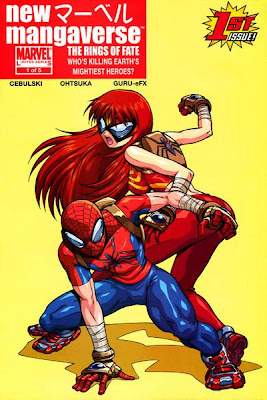 The story they said would never be told! It’s been a dark time since we last saw the Mangaverse. Most of the heroes (both human and mutant) have been driven underground. Nick Fury has vanished, leaving S.H.I.E.L.D. to fall into ruin. And now—someone’s killing super heroes!

I bought all five titles in this run and in issue one all the building blocks are put in to place to start this thrilling story penned by C.B. Cebulski.

The first thing that grabbed me is the simple fact that there are many differences that I didn't know were in this universe.  All the heroes have gone underground, quite a few of them have died and my personal favourite is that MJ and Peter Parker fight side by side as heroes.

This issue starts with the deaths of two fairly well known characters and in my opinion, it starts the story with a bang.  That then leads in to another battle between MJ/Spider-Man and what look to be ninjas.  So far so strange but I mean strange in a good way.

All of this leads in to a great and shocking reveal that has made me incredibly eager to read the 2nd issue to see where they are going to take this story so kudos to Cebulski for making someone like myself who was nearly completely unaware of the 'Mangaverse' and hooking them straight in to it.

The art here is loud, brash and flashy but that really suits the whole feel of the issue.  Ohtsuka really does an amazing job with now 'Manga' style art work done on the really familiar characters that we have grown to know and love.  The art is smooth and really works best on the action sequences that are done in a fast, frantic way but without feeling cluttered and confusing.

The only thing I didn't like was the cover.  While it does show the style of the characters, in the form of MJ and Spider-Man, it didn't really have the wow factor of the rest of the issue inside.

All in all, a good start to the five issue story, although as a fan unfamiliar with this universe I was a little confused to begin with.  That said though, I really enjoyed this issue and the shock ending so hopefully the other four issues will keep the momentum going.

Posted by Pat Scattergood at 12:19