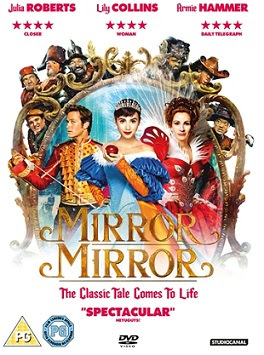 After a beloved King vanishes, his ruthless wife seizes control of the kingdom and keeps her beautiful 18-year-old stepdaughter, Snow White, hidden away in the palace. But when the princess attracts the attention of a charming and wealthy visiting prince, the jealous Queen banishes the girl to a nearby forest. Taken in by a band of rebellious but kindhearted dwarfs, Snow White blossoms into a brave young woman determined to save her country from the Queen. With the support of her new friends, she roars into action to reclaim her birthright and win back her Prince in this magical adventure comedy that will capture the hearts and imaginations of audiences the world over.

This movie got an absolute beating from a lot of critics but I really don't understand why.  What we have here is a funny and exciting family movie that tells the story of 'Snow White' in a different way.

One of two new takes on the Grimms fairytale, the other being 'Snow White and the Huntsman', this one adds layer after layer of humor and fun to proceedings.

The characters here aren't the ones you would remember from the story.  The seven dwarves aren't the Disney ones with the funny names.  Instead you get quite quite bitter and cynical dwarves who are thieves and bandits.  Robbing people of their treasures and their clothes, the sight of them on massive springed legs that make them look like giants is a fantastic visual.

The character of the prince is extremely well done.  There's none of the suave, Disney style prince stuff here.  Instead we have a prince who is easily confused, clumsy and even, at times, quite dumb.  Some of the scrapes that he gets in to are very funny.  My favourite of these being the fact that every time he gets robbed someone steals his clothes and leaves him in his underpants.

Snow White is played by Lily Collins, who got some rather mean and horrible comments in the reviews of this movie.  Most of those revolving around her eyebrows for some reason, although what that has to do with the quality of the movie I have no idea.  Personally I think that she made a great portrayal of Snow White.  For once, the character wasn't portrayed as a week, damsel in distress.  Instead she was portrayed by Collins as a bad ass woman who could more than defend herself and I think that made a fabulous change from the norm.

The dwarves, with their distinct and varied personalities, were an absolute riot in this movie.  Half Pint, played by Mark Povinelli, was by far my favourite of these.

The movie however belongs to Nathan Lane, as The Queen's bumbling side kick Brighton, and Julia Roberts as the Evil Queen.  Both really seemed to relish their parts and played them to the hilt.  Roberts in particular seemed to be having a lot of fun being the cruel evil queen, which completely plays against the type of character we're used to seeing her portray.  Lane was fantastically camp and useless as Brighton but gave him a really sweet and kind heart.  That really gave the character an extra layer that would have otherwise been lacking.

I would be very remiss if I didn't mention the absolutely stunning direction by Tarsem Singh, who directed 'The Fall', which is one of my favourite movies of all time.  He really has an eye for great settings and how to make a scene jump off the screen at the viewer.  The opening scene where the Queen narrates part of the story is told using porcelain dolls.  That was an extremely brave choice and could have looked horrible but in Singh's hands, it was a thing of pure beauty.  If you liked how this movie looked then check out his earlier movie, that I mentioned earlier, called 'The Fall' because it's even more beautiful.

The special features here are a little disappointing and I would have loved to have seen a few more bits and bobs included but beggars can't be choosers.

All in all, I think a lot of the complaints levelled at this movie were incredibly unfair.  Is it a great movie?  Far from it.  Is it an enjoyable fairytale for all the family to enjoy?  Very much so so go check it out.