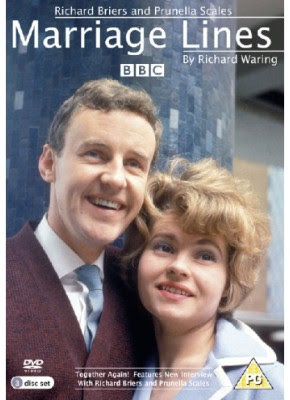 
Marking 50 years since it was first broadcast, this DVD collection brings
together the complete series one and complete series three of the groundbreaking
marital comedy Marriage Lines. This hit series, written by Richard Waring
(Rings on Their Fingers) , is also notable for the sparkling comedic brilliance
of its rising young stars, Richard Briers and Prunella Scales.

Newly-married George and Kate Starling arrive home from their honeymoon to discover
that they’ve lost their door keys. How they come to meet their new neighbours and
events that follow, sets the tone for a series that lovingly explores the perils and
pitfalls of love, marriage, anniversaries, petty quarrels and the kind of making-up
that’s not so hard to do.

Series two, and so many more, are irreplaceably lost, but luckily we have uncovered
series three, returning to a heavily pregnant Kate and George in their new flat, facing
up to the realities of becoming parents – something which Kate takes to with grace and
assurance, while George will keep stubbing his toe on the crib in more ways than one.
Fifty years on, it seems like only yesterday as Richard Briers and Prunella Scales
find themselves living the result of those Marriage Lines.

'Marriage Lines' starring the comedic talents of Richard Briers and Prunella Scales was a wildly popular series from the 1960's that rain for 5 series as well as being adapted for radio by it's writer Richard Waring.  But does it stand up to viewing today?

In much the same way as the classics like 'Monty Python' and 'Fawlty Towers' have grown to gain young fans with each generation, 'Marriage Lines' definitely deserves to go on to that fate too.

The comedy is slow, gentle and deliberate but the intelligent writing makes it incredibly true to life.  Everybody knows somebody who has gone through at least a handful of the things that this young married couple go through.  It's a simple premise and the episodes have the simple problems that plague us all.  It's things like getting locked out of their flat, George finding that no matter how big their bed is Kate will still want to sleep on his side and leave him with a tiny bit of the bed to sleep on.  It's the simple things like that and that makes the series completely endearing.

However it's the twin performances by a very young Richard Briers and Prunella Scales that make this series so good.  You watch the show really believing that they are a young and newly married couple just starting out in the world.  You can't help but root for them to succeed and feel sorry for them when it inevitably goes all wrong despite their best intentions.

This set is a treasure trove of really good episodes with some adorably sweet moments but sadly the entire second series and a lot of the other episodes have been lost to the ravages of time and to the problem that plagues a lot of the old 'Doctor Who' episodes in that someone has deleted and/or lost the tapes they were recorded on to.  That's absolutely heart breaking because this is one of the best television shows from the classic age that I have ever had the pleasure of seeing.

The picture transfer is pretty good considering the age of the tapes.  There is a bit of print damage every now and then but that's to be expected.

There aren't numerous special features here just a gallery and filmographies on one hand but then there is a massive feature where Scales and Briers are reunited after nearly fifty years to talk about the series that started their careers.  To be honest, that's the main reason for the relatively high score for the special features because it's a lovely feature and really shows the amount of love and affection the stars have for the show and the characters themselves.

All in all, this is a fantastic series that deserves to have been finally been released on to DVD to find new fans, as well as the old ones.  It's a really shame that so many episodes have been lost but the ones that are here that comprise the complete series one and three are so good that it's completely worth getting the set for.  Add in the 'Starling's Reunited' special feature as well as a great bonus and there's really no reason to not get this.

Posted by Pat Scattergood at 00:13