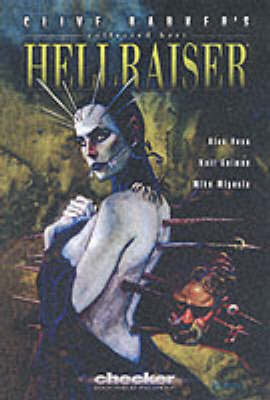 With a myriad of writers and artists that include such figures as Clive Barker, Neil Gaiman, Alex Ross, Mike Mignola amongst others, the world of the Cenobites         comes alive straight from the depths of Hell!

Clive Barker, quite frankly, is an absolute legend in the world of horror. Some of the most frightening stories and movies that have ever been ingrained in to my psyche have come from his rather warped mind.

So with that firmly lodged in to my brain, I opened this collection of stories set in the world of the Cenobites with a mass of excitement and expectation.

Sadly, I was quite disappointed.

The whole collection felt very hit and miss as well as feeling rather disjointed. Don't get me wrong however, there were flashes of incredible talent and brilliance. The work done by Clive Barker, Alex Ross, Dave McKean, Neil Gaiman and Mike Mignola were absolutely superb and worth the price of the collection itself.

However it was the other tales that let this anthology down. Even the poorly done tales were hit and miss amongst themselves. Some had good artwork but poor stories, others the other way round. Then there were a couple that were poor on both fronts.

My favorite tales were the ones by Neil Gaiman and Clive Barker, although that should not come as a surprise to anyone as they're consistently good. Whereas my favorite artwork came from the brilliant Alex Ross and Mike Mignola.

While for major fans of the whole Hellraiser/Cenobite mythology these stories do add a lot more back story to their existence yet the world won't end if you don't read these. Like I said before however, the work here by Clive Barker, Neil Gaiman, Mike Mignola, Dave McKean and Alex Ross are worth getting the set for, just prepare to be slightly disappointed by the other tales here.

Posted by Pat Scattergood at 10:45