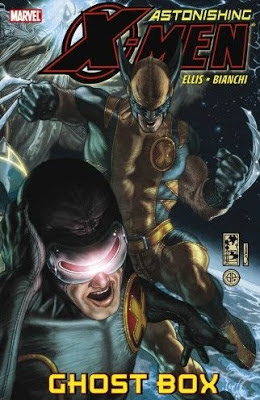 It's the book you've been waiting for! The superstar team of Warren Ellis and Simone Bianchi are ready to take the X-Men to the "Second Stage"!

Messiah CompleX pulled the X-Men team together, Divided We Stand tore them apart.

Now the X-Men are back to business - with a new look, a new base of operations, and a mystery to solve that will take them into previously uncharted territory and test them to their core!

Warren Ellis and Simone Bianchi. Two names that well known to the major comic book fans amongst us,  While Ellis, in my opinion, is a little over rated at times Bianchi still don't get the recognition that he deserves for his superb art work.

Together they have crafted an X-Men tale that manages to be shocking, intelligent and exciting all in equal measure. There are twists, turns and revelations galore and not once does it fall in to the crap of being a cliche.

The one problem I have with some X-Men stories is that sometimes you don't get a feeling of there being a threat towards them and that you always feel that they will win no matter what happens. This story is the complete opposite. Right up to the end you just don't know who will live and who will die. You truly don't know if they will win in the end or if they do win, what will the cost truly be?

After the main story itself, there is a series of shorter tales depicting what happens in the aftermath of the whole adventure. This is where a couple of the major shocks happen. I won't ruin them by explaining them here but when I closed the book, I was actually shocked. That feeling hasn't hit me after reading a super hero story for a long time.

The writing is slow and deliberate in places and fast paced in others. That could make for a disjointed story but here it works brilliantly. There is a dark, almost Gothic like tone to the story.

The artwork is absolutely superb. In parts beautiful and others hard hitting, the art here by Simone Bianchi is some of the best in a comic book series, yet alone an X-Men title, that I have seen for a very long time. Every little detail here is catered for even down to the beads of sweat on their faces.