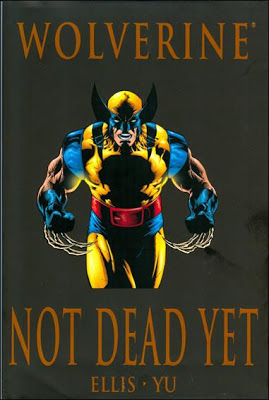 
If Wolverine Killed Him, Why Would He Come Back For More?

Wolverine's past is full of nasty characters, but few as fiendish as the White Ghost, a murderous mercenary whom Logan thought he'd left for dead during his spy years! But this Ghost won't be laid to rest until he's run Wolverine through a gauntlet of Adamantium weapons, killing the mutant maverick with the very metal that's saved his life so many times! Unwilling to risk his friends, Wolverine stands alone in a story of intrigue, romance and devastation, culminating in a clash between two killers.

I'm going to be completely honest here. I have always thought that Warren Ellis is a massively over rated and over hyped writer and yet fans seem to go absolutely gaga over his work.

Here, that changes. In 'Wolverine: Not Dead Yet' Ellis has taken a character that is best known for his rage and turned him in to a cerebral and psychological entity.

The story here runs in both the present time and as a series of short but effective flashbacks creating a both a coherent story and one full of a sense of history.

Wolverine's enemy is a seriously unhinged murderer and yet one with a brain. That makes a nice change in that it's good to see an enemy with clear cut motives and ideas instead of just doing stuff for the hell of it.

The artwork here is spot on perfect for this release. I'd not really been all that familiar with Yu's work yet after reading this I will definitely go out and find some more.

All in all, even if you're not a Wolverine fan, I would seriously recommend this story. Hell, even if you aren't a fan of Warren Ellis either, this is definitely one of his best better works and well worth taking a look at.

Posted by Pat Scattergood at 12:42