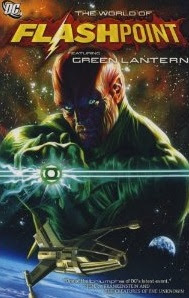 A series of stories set in the world of the 'Flashpoint' saga featuring the Green Lantern!

Ranging from Abin Sur being alive right up to a story involving a platoon of monsters and beyound.

The ‘Flashpoint’ storyline in the DC universe was always a bit hit and miss. A great idea on how to change everything up in a big way on paper turned in to something quite convoluted and disappointing in my eyes.

That’s not to say that there weren’t some great moments because there really were some absolutely great moments.

In this collection of stories from that massive storyline, the same problems are still here. It’s still a bit of a hit and miss collection but let’s look at these individually.

‘Abin Sur: The Green Lantern’ is one of the guiltiest of being hit and miss. The story itself is interesting with some very good moments. I really liked the idea of seeing more of the Abin Sur character and there were some cool developments here but it was the artwork that was disappointing. In places it looked really clear and well drawn but in others it came across as a cluttered mess.

‘Frankenstein and the Creatures of the Unknown’ however is one of the better stories in the collection. In fact, I would really like to see more of their adventures. Jeff Lemire does a really good job of making this tale exciting and fast paced but with well rounded characters. The art is much better than what I saw in the ‘Abin Sur’ story so that was a improvement.

‘Green Arrow Industries’ was a disappointment however. In an attempt to make the Green Arrow in to a normal person, the story came across as a cheap knock off of the Tony Stark character in Marvel’s ‘Iron Man’ stories. The apparent twist at the end was poorly written and a massive cliché as well. The art is well drawn but isn’t enough to raise the quality enough of the story.

Finally ‘Hal Jordan’ tells the interesting story of what would happen had Jordan himself not been given a Green Lantern Corps ring and I have to admit it’s definitely the best of the bunch. Told entirely from Jordan’s perspective, the tale shows a cocksure young man suffering from the tragic loss of his father and taking unnecessary risks because of it. Ultimately this leads to an attempt at redemption that is incredibly well written. Put that with the subtle artwork then you really do have a great story.

All in all, I’d say that this is definitely one for the massive fans in our midst that want every part of a story arc. If it hadn’t have been for the stories ‘Frankenstein and the Creatures of the Unknown’ and ‘Hal Jordan’ then this collection would have been a 2 rating but thanks to those I’d say it’s a mild recommendation for an ultimately underwhelming collection.