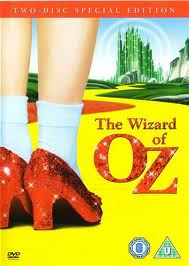 Written By Noel Langley, Florence Ryerson and Edgar Allan Woolf based on the novel 'The Wonderful Wizard of Oz' by L. Frank Baum
Directed by Victor Fleming

Judy Garland as Dorothy
Frank Morgan as Professor Marvel / The Wizard
Ray Bolger as Hunk / The Scarecrow
Jack Haley as Hickory / The Tin Man
Bert Lahr as Zeke / The Cowardly Lion
Billie Burke as Glinda, The Good Witch of the North
Margaret Hamilton as Miss Almira Gulch / The Wicked Witch of the West
Clara Blandick as Auntie Em
Charley Grapewin as Uncle Henry

Dorothy, an innocent farmgirl, finds herself whisked away to the magical land of Oz after a massive storm hits the farm she lives on.  Her journey will take her down yellow brick roads, through Emerald forests and even to the Wicked Witch of the West's castle but will she manage to find her way home?

I have always thought that Judy Garland was and always will be one of the best actresses from the 'Golden Age of Hollywood' and this movie shows exactly why.

In the most famous adaptation of the book 'The Wonderful Wizard of Oz' by L. Frank Baum, the magical story is transported to the screen in such a way that the viewer can't help but be sucked in to the whole story.  The writing manages to keep the charm of the book by staying as true as possible to the novel itself.  Yes, there are a few changes but that's always the case in movie versions of novels yet here, they don't seem out of place in the slightest.

The cast is absolutely incredible.  It's spot on perfect for this movie, combining older and more experienced actors and actresses with younger members starring in their first movie.  Judy Garland, the obvious star of the movie, more than holds her own against the 'old hands' of legends such as Bert Lahr and the like.  In fact, she acts them off the screen on more than one occaision.

With Garland's performance you can really see the sense of wonder in Dorothy's facial expressions and mannerisms without being too over the top with her portrayal.  For me, it's nigh on impossible to imagine anybody else in the role no matter how many versions they make.

The Scarecrow, Tin Man and Cowardly Lion played respectively by Ray Bolger, Jack Haley and Bert Lahr, give fantastic performances.  The best of these is Ray Bolger's portrayal of the Scarecrow.  Somehow, while the character is incredibly clumsy, he manages to do it with such grace that not a single movement is wasted.  Bert Lahr, who plays the Lion, gets a lot of the of the laughs using his legendary comic timing.  Jack Haley, gives the group it's heart if you can excuse the pun, by being so sympathetic that you really hope he gets to the end of the adventure with everything that he wants.

The music and lyrics by Harold Arlen and E.Y. Harburg, who won an Academy Award for 'Over The Rainbow', are as loved today as they were then.  Nearly every song throughout the movie is an absolute classic.  My favorite being 'If I Only Had A Heart' that always gets a smile out of me no matter how bad my day has been.

I'd be a bit of a rubbish fan if I didn't mention the Academy Award winning score by Herbert Stothart that underscores the whole movie.  He seems to know just when to put a piece of music in a scene and when to let the action speak for itself and that lends the musical score a nice subtle air.

The special features absolutely spoil us fans of the movie.  In fact, there is treasure of material, a lot of it not seen before.  The documentary 'The Wonderful Wizard of Oz: The Making of a Movie Classic' is very informative and has lots of the cast returning to recall their memories about the making of this classic and timeless movie.  In a nice touch by the makers of the documentary, they have Angela Lansbury, star of 'Murder She Wrote' as well as a hell of a lot of musicals such as 'Mrs Clause' and 'Sweeney Todd', present it.

All in all, this is one of the only movies that I can hand on my heart give a 5 out of 5 too because of two simple facts.  One it's brilliantly made and that simply put, makes it a timeless movie and of the fact that no matter how many times I watch this movie I never get bored and I always notice new things.  You can't really say that about very many movies these days can you?